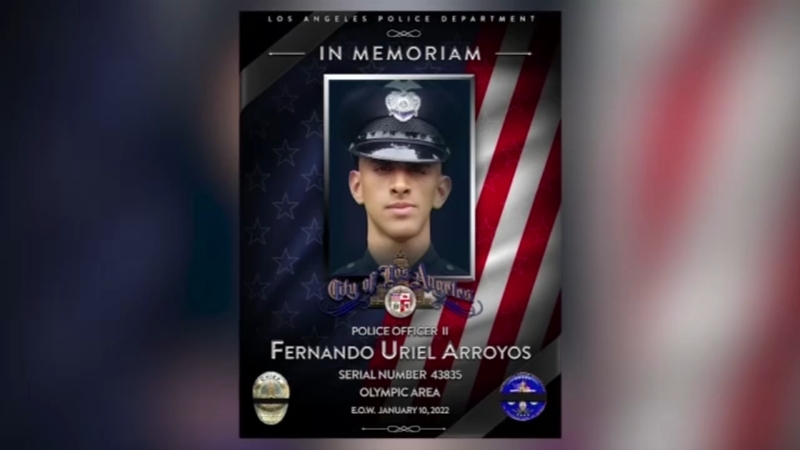 LOS ANGELES -- An off-duty officer was fatally shot during an attempted robbery while house-hunting with his girlfriend, according to Los Angeles Police Chief Michel Moore.

Officer Fernando Arroyos, 27, "was starting a very promising career," Moore said Tuesday. He was with the department for three years and assigned to the Wilshire Division.

"He found himself, after working a series of days in patrol, to have a day off, enjoying it with his girlfriend on a hunt for a house, a place to live, a place to buy and invest in in this city and the future of this region," recounted Moore about Monday night's incident.

Five people were detained in connection with the shooting, the Los Angeles County Sheriff's Department announced Tuesday. No charges have been filed against the three men and two women, officials said.

We mourn the loss of Officer Fernando Uriel Arroyos who was killed while off-duty in a senseless act of violence. Officer Arroyos is survived by his parents & girlfriend.

God bless his family who lost their loved one, & the men and women of the dept during this difficult time. pic.twitter.com/XirohPK0oh

Arroyos and his girlfriend parked their car on a street just outside the city limits, and they were crossing the street to look at a home, according to Moore.

The chief said three men got out of black pickup and tried to rob Arroyos. One had a handgun, the chief said, citing preliminary information.

"The officer yelled to his girlfriend to leave, to run, go back to the car," Moore said.

There were gunshots and the officer, who returned fire, was hit, the chief said.

The suspects fled in their truck while the officer's girlfriend tended to Arroyos. Los Angeles County sheriff's deputies responded to the scene and took the officer to a hospital where he died. The sheriff's department is investigating the shooting.

It also is investigating an incident a few miles away in which a man was found with a gunshot wound. Detectives are working to determine whether that person or the second shooting is related to Arroyos' death.

Arroyos is survived by his mother and stepfather.

"He was the only child, he had a promising future, a bright future that was taken away, viciously, over a street robbery," Moore lamented.

"Our hearts break over this tragic loss for our police department and our city," the mayor tweeted. "I join all of Los Angeles in grief today, and I am keeping his loved ones in my prayers."