Woman says she ended up with $19,000 dental loan she didn't sign for 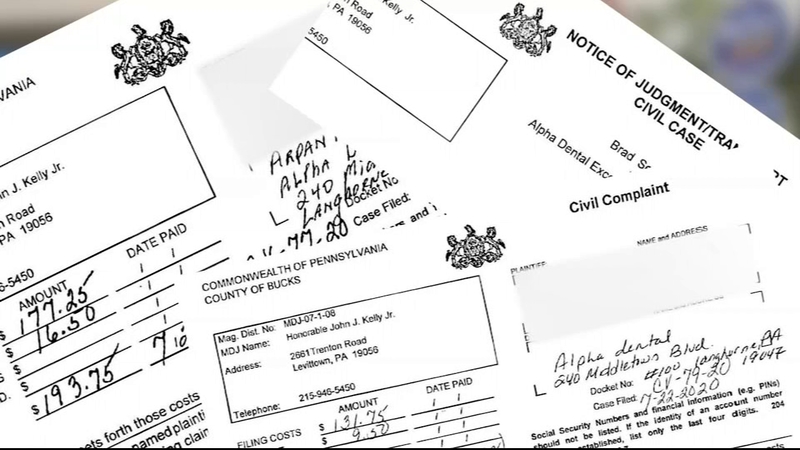 BUCKS COUNTY, Pennsylvania (WPVI) -- A Bucks County woman is warning others after she said she ended up with a $19,000 dental loan for which she didn't sign.

Regina Finley said it happened after she went to Alpha Dental Excellence in Langhorne for a $49 teeth cleaning.

She said she contemplated getting new crowns and permanent teeth after visiting the office.

Finley said the dental office's Treatment Coordinator told her, she could finance the work.

She said she told the employee she wanted to discuss with her husband,

"She said, 'When would you like to start?' And I said, Well, I like to start as soon as possible. But I know I have to get the loan first. And she went, No, no, we'll start tomorrow"

She said she went back the next day for some preliminary work while deciding to still shop around.

ACTION NEWS INVESTIGATION: A local woman turned to Action News after her car was stolen and wrecked while getting repaired by a national automotive chain.

"And she said, Cheryl wants you to sign this. I said, what am I signing? She goes, that you're approving the dentist working on your teeth," said Finley.

She said she had several teeth pulled that day but after discussing the price with a relative who is also a dentist decided to do the remaining dental work under his care out of state.

Have a story for us? Contact the Action News Investigation Team

Several weeks later she says she soon realized she had a loan with Greensky, a company who does healthcare financing.

The interest rate was nearly 10% and her payment more than $300 a month.

She said she contacted the owner of Alpha Dental Dr. Arpen Patel.

"I said, Dr. Patel, I just got a loan that was signed by somebody else that's forgery," said Finley "This loan I never signed. He goes, oh, no, no, no, if you're going to talk forgery, you better get a lawyer."

She said she soon found something odd.

4 days after sitting in the chair for the preliminary work, she said Alpha Dental kept calling for additional signatures on paperwork.

She went to Middletown Township Police which said it couldn't comment to Action News.

No charges have been filed, but Finley took Dr. Patel to court.

And Finley is not the only one filing complaints.

Action News has uncovered 5 lawsuits against Alpha Dental Excellence within the last 2 years where a judge a ruled against the company.

ACTION NEWS INVESTIGATION: A Montgomery County woman's lawsuit claims that she ​contracted ocular herpes at a makeup counter inside a local mall

"He literally left me in stitches," said Moore. "I had stitches all in my mouth, and refuse to see me unless I paid on them full."

Moore said she attended a dinner hosted by Alpha Dental Excellence at a local restaurant,

"So I went up, it's a high pitch sales thing," she said. "They have a bunch of people probably about 10 people have their employees that run around giving out folders making appointments."

Both women said even after being awarded judgements, collecting can be costly.

After legal fees, they worry, they'll receive just a fraction of what they should receive.

We asked Dr. Patel about the allegations.

"I'd like to talk to you about Regina Finley and Barbara Moore," asked Chad Pradelli. "I have no idea what those are and I can't comment on those," replied Dr. Patel.

"The Judge ruled against you," Chad Pradelli asked Dr. Patel.

"It's yet to be determined," he replied.

"Well, Regina Finley says that she that she did not sign loan documents for a dental loan?" said Pradelli.

"That has have yet to be determined but thank you," Patel replied.

Dr. Patel has filed appeals in both cases and has not been criminally charged.