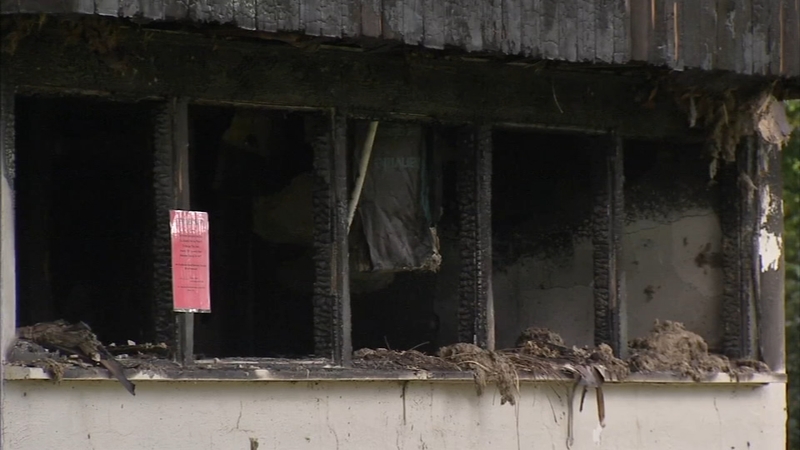 SOLEBURY TOWNSHIP (WPVI) -- A fire that damaged a historic house has been deemed suspicious by authorities in Bucks County. Police say they are also looking at a two other fires to see if they could be connected.

Chopper 6 was over the scene as firefighters worked to put out the fire at the historic home in the 1600 block of River Road.

Officials say it started around 7:40 a.m. Thursday and was called in by someone driving by.

Det. Cpl. Jonathan Koretzky of the Solebury Twp. Police Department said, "Police and fire company arrived on scene to find moderate fire to the rear of the dwelling going up into the roof area. After about an hour, the fire was under control. We took a look at the aftermath and saw the heavy damage in the rear of the 18th century home known as the Victorian Neely House."

The home is owned by the state. With police saying the fire is suspicious, they're asking for the public's help.

Solebury police are also looking into two other recent fires in Upper Makefield Township to see if they might possibly be related.

One happened around 6 a.m. Wednesday in an unoccupied, former business on Taylorsville Road. The other happened on July 25 when a small barn on Stoopville Road went up in flames.

Resident Pete Marciano of Upper Makefield Township said, "I walked out to this location and I looked down the drive and it was just a ball of fire. The garden center which was made of wood was completely consumed."

The Upper Makefield fire marshal says the Taylorsville Road fire was an accidental electrical fire, and the cause of the barn fire is undetermined, but not suspicious.

Still, Solebury Township police say they are looking into those fires as part of this investigation.

"We always ask people to keep an eye out for any activity, anything suspicious, and anything that may be strange. Call us. Call 911 and let us know," said Koretzky.

The exact cause of Thursday morning's fire is still under investigation.

Police are looking for witnesses who may have been in the area of Bowman's Tower or the Bowman's Hill Wildflower Preserve early Thursday morning. Anyone with information should contact police at (215) 348-7400.
------
Send a News Tip to Action News
Learn More About 6abc Apps
Report a correction or typo
Related topics:
pennsylvania newsfire
Copyright © 2021 WPVI-TV. All Rights Reserved.
More Videos
From CNN Newsource affiliates
TOP STORIES