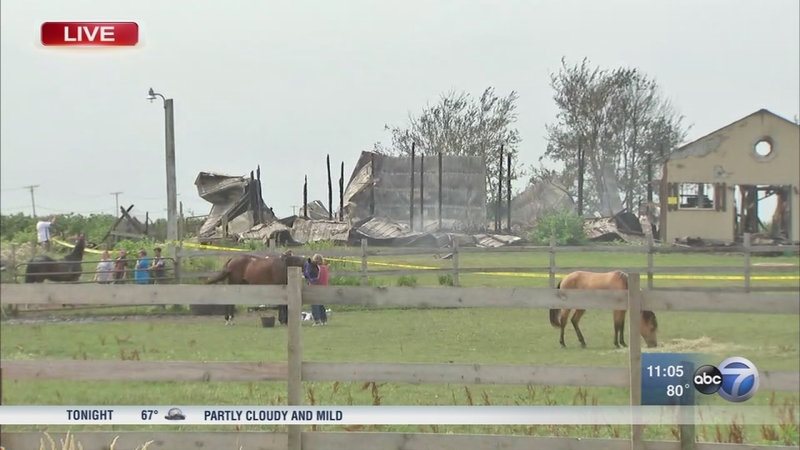 When they arrived, the west side of a barn was fully engulfed by flames. A nearby storage trailer containing wood shavings and sawdust was also on fire.

Stable workers and horse owners were trying to rescue their animals. Two workers suffered minor injuries in the process. One was treated for smoke inhalation at a local medical facility, officials said.

There were 30 horses in the barn at the time of the fire. The owner of the stable put out an alert on Facebook asking people to help find 11 missing horses that were let out during the fire. By around 7:30 a.m., he said all of the horses had been accounted for.

A total of eighteen horses died in the fire. Many of the owners who boarded their horses at Del Real were too emotional to talk about the loss of their animals as fire and police officials continue to investigate.

A woman who lost her 8-year-old Arabian in the fire tweeted Wednesday morning, saying that that the animal meant so much to her. She purchased the horse to help her through the death of her mother.

The fire spread before crews were able to get it under control around 1:45 a.m., Stratton said. With no hydrants in the area, firefighters used tankers full of water to try to put out the blaze.

"With the Fourth of July, pretty much anywhere you go, there are fireworks being shot. That is something that we are looking at. Right now, we don't have any indication that fireworks were the cause. One of the things we do is walk around the property, areas that are unaffected by the fire, especially in this circumstance, to see if there is any firework debris - paper-related to fireworks debris - left behind. As of right now, we have not found anything like that," Plainfield Police Chief John Konopek said.