1 dead, 2 injured in fire at apartment complex in Newark, Del. 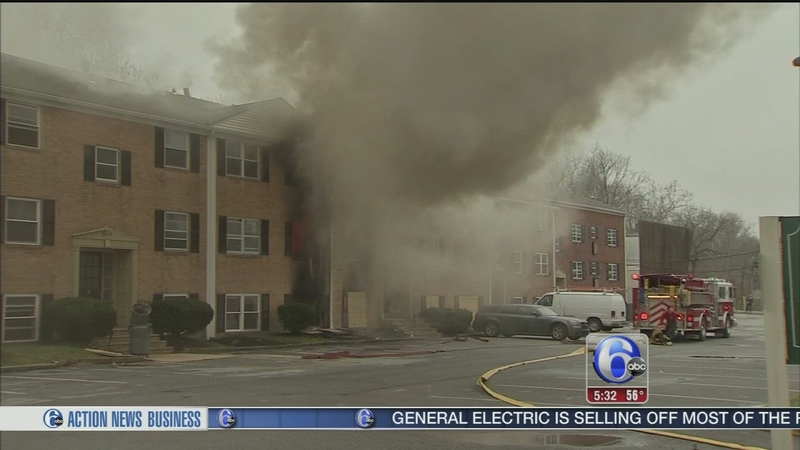 NEWARK, Del. (WPVI) -- One woman was killed and two other people, including a firefighter, were injured after fire broke out at an apartment complex in Newark, Delaware.

The fire was reported at 10:30 a.m. Friday at the Possum Park Apartments in the 600 block of Old Capitol Trail.

Firefighters arrived to find thick smoke and flames coming from the front of a 3-story brick building.

Images from the Action Cam at the scene showed firefighters and medics tending to several people who had been evacuated.

Action News is told one woman jumped from her third floor apartment to escape the blaze. She suffered two broken ankles and a back injury.

The firefighter injured suffered burns to the ears. He was treated and released.

A woman in a first floor apartment, where Action News is told the fire started, did not make it out of the building. She was pronounced dead at the scene.

The woman's sister, who lives with her, was able to escape with her dog.

"She said 'Cheryl yelled for me that the couch was on fire.' Then she said, 'I got out and ran to the kitchen to get the fire extinguisher.' Then she said 'It was so smokey in there you couldn't see anything," said friend Richard Edmanson.

Edmanson said the 60-year-old victim was in poor health and had to breathe with an oxygen tank. Investigators don't know yet if the oxygen played a role in how quickly the fire intensified.

Edmanson also said he just saw his friend for the last time just a few days ago.

The fire was originally placed under control within a half hour, but it flared up again with a small explosion around 4:15 p.m.

Firefighters responded once again to douse those flames.

An investigation into what caused this fire continues.