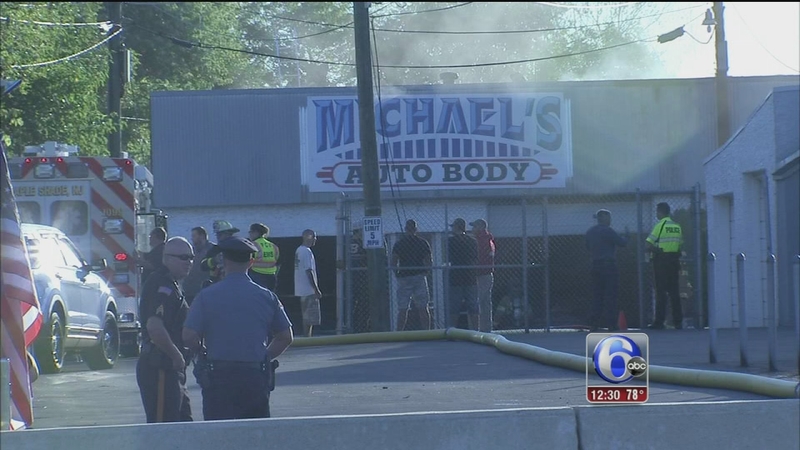 Fire companies were called to Michael's Auto Body on Route 73 near High Street around 6 a.m. Monday.

They were met with heavy fire in two bays of the auto body shop. In the end, five bays of the building were destroyed, and four vehicles were lost.

"It was almost like mushroom clouds," said Bob Marshall of Maple Shade, N.J. "The inferno... the flames... Tremendous flames. Tremendous."

Firefighters were able to keep the fire from spreading to two more bays with four more vehicles inside. But there was still heavy smoke, heat, and water damage in that half of the building.

Crews also stopped the flames from advancing to the back garages.

Dominic Marano shot video of the black smoke and raging fire on his cell phone.

He had just showed up for work at the auto shop across the street when he saw crews arrive.

"I saw flames and smoke," he told Action News, "and a couple of cop cars. And within a couple minutes there were 6-8 fire trucks, more cops, EMS...."

The fire was placed under control shortly before 7:45 a.m.

Rush hour traffic had already begin to stack up along Route 73 near High Street, as two lanes were closed for the fire activity.

No one was inside when the fire broke out, and no injuries were reported.