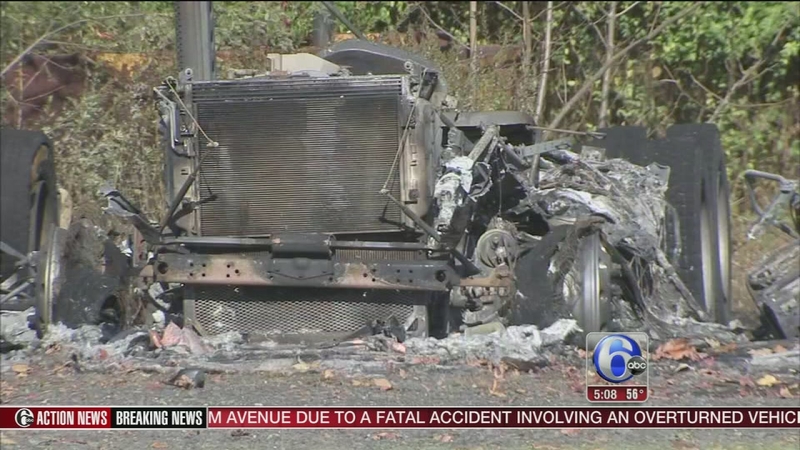 BRISTOL, Pa. (WPVI) -- The ATF is now involved in the investigation into the mysterious fire that destroyed several trucks at a Bristol Township business.

The trucks are a total loss. $300,000-$500,000 worth of semi tractors went up in flames Monday morning. Three of them melted down almost beyond recognition.

All of this destruction, the work of an arsonist.

Fire Marshal Kevin Dippolito explains, "It's been ruled an arson fire. We have three tractors in the one area that were on fire and four in the other area."

The initial call came in as a dwelling fire around 5:19 this morning. When firefighters got to the business, located in the Magnolia Business Park, they found the seven trucks burning intensely.

They had to cut a lock on a gate to get to them, but by then the damage was done.

They are owned by High Gain Incorporated, a company that hires drivers and leases out the trucks to various other companies.

The owner's wife says they haven't been threatened and don't know of any disgruntled former employees.

Investigators have collected evidence from the scene and say they have a lot of ground to cover.

"We're looking at every angle... We have a lot of interviews to conduct. It's probably going to take several days to conduct a lot of these interviews," Dippolito said.

The fire marshal has called in federal agents from Alcohol Tobacco and Firearms to help with the investigation.

The lot is surrounded by barbed wire fence and the gate was locked last night. The arsonist got in by cutting holes in the fence toward the rear of the property.

The lot had no video surveillance, but investigators are hoping to learn something from cameras on nearby buildings.

The owner's wife says they're just a small blue collar company and can't understand why they would be targeted like this.