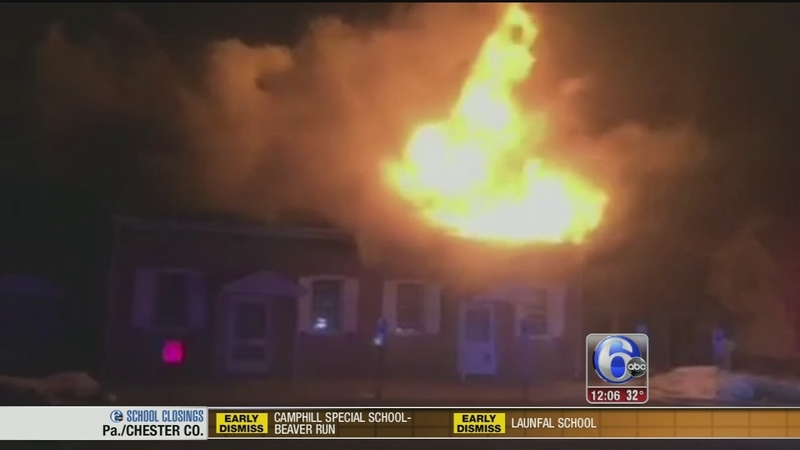 Associate pastor Steve Johansson told Action News he was up late because he couldn't sleep. He said he heard noises and then discovered the blaze in a building next to where he and his family live.

"I smelled some smoke. Our door faces the offices of the church, and saw flames coming out of the offices there, so I called 911," he said.

Johansson was able to get his family and several pets out safely, along with another family who lives on the other side of the building.

Crews brought in tanker trucks to help fight the blaze.

The congregation of approximately 500 people will meet Sunday for services at another location yet to be determined.

There also be a meeting Tuesday night with church leaders and fire officials to determine if the sanctuary, which escaped heavy damage, could be used for upcoming services and weddings.

The church began operating in 1811 as a Quaker Meeting House and is one of the oldest buildings in Burlington County. The Easton Bible Church bought the property in the 1920s.

As dawn broke on Tuesday, parishioners - including former pastor Ted Trump - came by to see the damage.

"When I first saw [on TV] I got emotional," he said. "I got dressed and rushed out here."

Current head pastor Joe Scro said he is confident the congregation of 500 will come back from this.

"We're going to give thanks for God's protection, for what he's going to do going forward. I have no doubt we're going to be stronger in our faith as a congregation," he said.

An investigation into the cause of the fire continues. Investigators say, at this point, they do not believe the fire is suspicious.