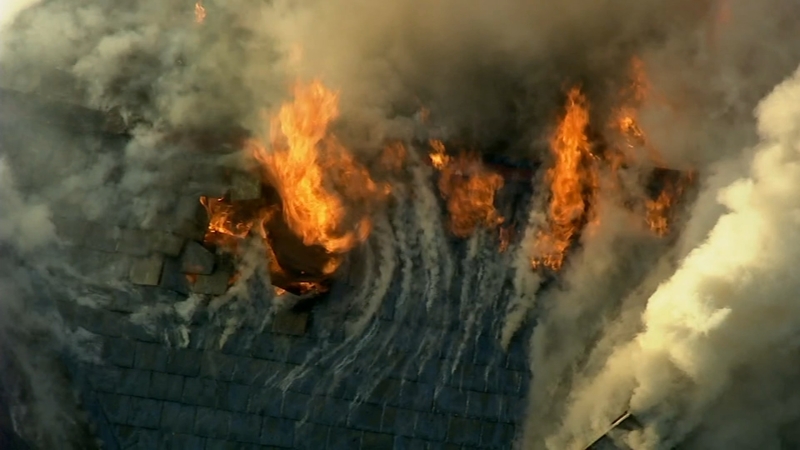 A three-story house, known to many in Clifton Heights as the former candy shop, was ravaged by fire on Friday.

Chopper 6HD was over the scene in the 200 block of South Penn Street after the fire broke out around 3 p.m.

"The house was pretty bad," said Amanda Jensen. "Oh, it was terrible."

Neighbors who live next door said the home was fully engulfed in flames within minutes.

"There were flames shooting out the window," said neighbor Debbie Rimmel. "So my reaction was to grab my daughter-she was in a fire 2 years ago- and run out of the house.

Shane Ferguson lives in the house with his mother, Donna, and grandmother, Mary.

"I was on my way to Bryn Mawr Hospital to drop off my mother to visit my grandmother at the time," said Ferguson. "A couple of my neighbors called me and let me know that the entire house was engulfed in flames."

It took Clifton Heights volunteer firefighters more than an hour to bring the fire under control.

One firefighter needed to be treated for smoke inhalation.

Meanwhile, a family is left homeless right at the start of the holiday season. the house is now heavily damaged and unsuitable for habitation.

"Unfortunately, there's not been much holidays with my grandmother in the hospital," said Ferguson. "That's where we spend most of our time anymore."

There is one thing Shane Ferguson is grateful for in this event: he said two men who were on their way to the Flyers game noticed the fire and ran in and rescued his two dogs and his cat.

The house was boarded up Friday night as the investigation into the cause of the fire continues.