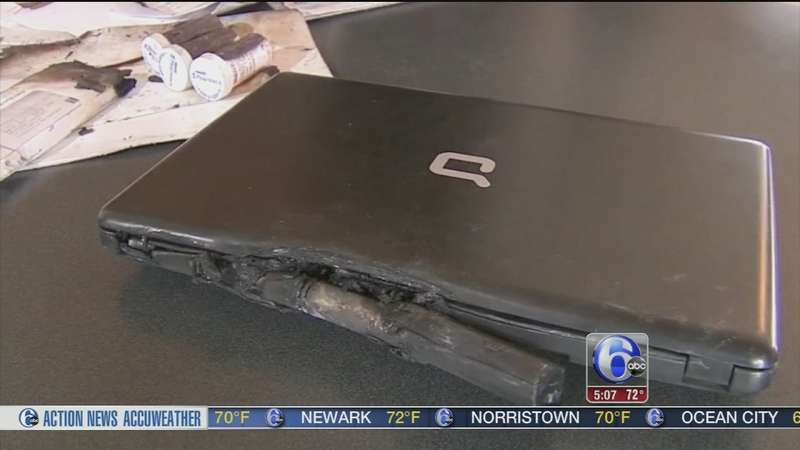 PHOENIXVILLE, Pa. (WPVI) -- A Chester County man says his house could have burned down after the battery in his laptop computer caught fire.

He then realized that battery may be part of a recall that he didn't know about.

"Flames were coming all from the middle," said Bob Domarasky, showing us his computer. "All four batteries must've popped at the same time."

This lithium battery for a HP Compaq Presario Laptop exploded. 888- 202-4320 is HP's dedicated # if u think u may have one in the recall pic.twitter.com/lViL1k5ZbX

The lithium battery inside Domarasky's Compaq Presario laptop burst into flames on his kitchen countertop inside his Phoenixville home Wednesday afternoon.

"I unplugged it from this plug," he said. "And I ran and threw it into the sink and put the water on."

But the fire continued to burn on the counter top, engulfing important paperwork, including insurance claims from a recent car accident. And it melted his medications.

"The flames were high," he said. "Plastic was shooting everywhere. I had it all over the walls.... The dogs could have been injured if this blanket wasn't here."

His house could have burned down, but Domarasky's quick actions doused the flames.

Hewlett-Packard announced a recall for specific lithium ion batteries last June, then expanded it in January and issued a number for people to call: 888- 202-4320.

Domarasky contacted the company by phone.

He says HP told him whether or not the battery in his laptop was part of the recall, the company would replace the computer and pay for all damages caused by the fire.

"What makes me mad is if you have this type of battery you should be notified by mail or email," said Domarasky. "I wasn't notified of anything."

He is urging all Compaq Presario owners to double-check that HP recall notice just in case.

"Who knows what could've happened, how many other batteries are out there that people know nothing about," he said.