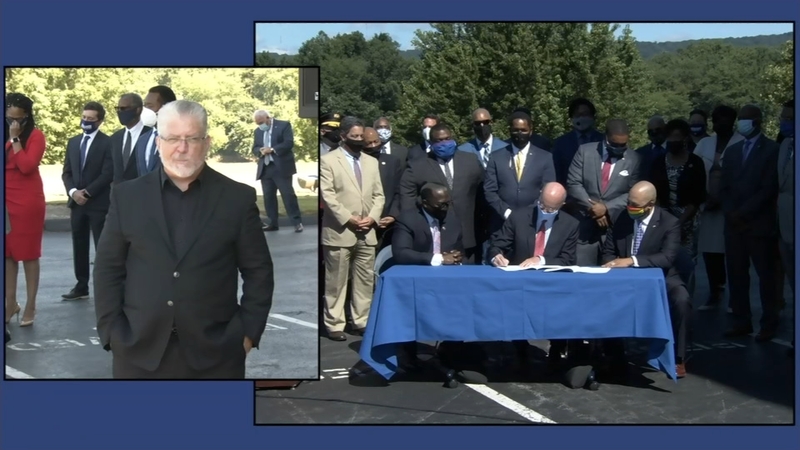 So far, bills central to Democrats' police reform platform - narrowing the allowable use of lethal force and appointing special prosecutors to investigate police shootings - have seen no action.

Also, with some states taking a fresh look at strengthening measures to hold police officers accountable, lawmakers in Pennsylvania have made no move yet to make police department records of officer discipline accessible to the public.

However, police unions oppose such a step, and the bills that reached Wolf's desk did so after police unions dropped their opposition, lawmakers say.

In a news conference Tuesday in Harrisburg, Wolf, a Democrat, characterized the two bills he signed as small, but important steps "toward what we have to do to make our society fair."

The bills passed the Republican-controlled Legislature after a renewed push by members of the Legislative Black Caucus following Floyd's May 25 killing. Some police reform bills have languished since 2018, when they were introduced after an officer fatally shot Antwon Rose in East Pittsburgh.

Under one bill signed by Wolf, a department must conduct background checks of job applicants that require an applicant's former department to disclose information on the officer's employment history. That history includes disciplinary actions, complaints and reasons for separation.
The Municipal Police Officers Education and Training Commission must maintain an electronic database containing that information. The bill does not allow public access to the database, but lawmakers point out that a department would have to write a hiring report and produce it to the public under the state's Right-to-Know Law.

The other bill requires officers to be trained every other year in how to interact with people of different racial and ethic backgrounds and to receive annual instruction on de-escalation and harm-reduction techniques.

It also requires officers to undergo a mental health evaluation for post-traumatic stress disorder within 30 days of an encounter in which the officer used lethal force or at the request of a supervisor.

An officer who shows symptoms of post-traumatic stress disorder during an evaluation must wait for a licensed physician to clear them to resume full duties.

Two other bills have passed the state Senate, but remain pending in the House.