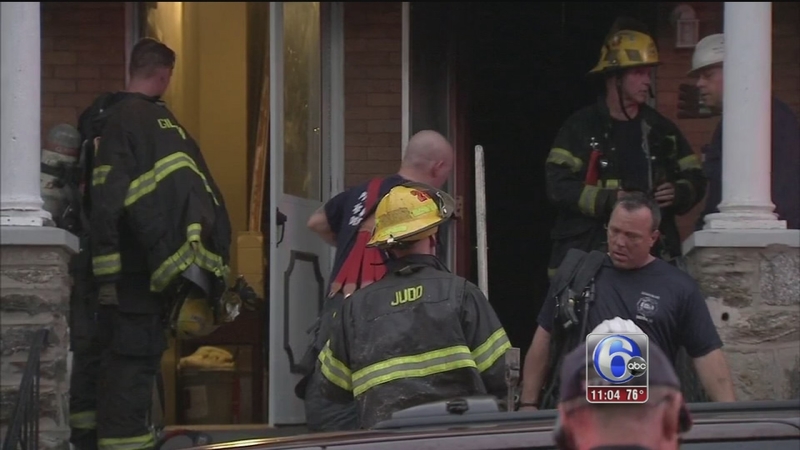 GERMANTOWN (WPVI) -- A man was killed and four others were injured, one critically, in a house fire in Philadelphia's Germantown section.

The fire started around 6:15 p.m. Sunday at a home located on the unit block of East Clapier Street near Germantown Avenue.

When Eugene Brown and neighbors saw smoke pouring from the roof of the home, they sprung into action.

"We all was screaming and hollering trying to get them to let us know where they was at," said Horace Timmons, neighbor.

"One lady fell down the steps and we couldn't get to her because it was too much smoke," said Eugene Brown, neighbor.

Because of that thick smoke, they had to wait for emergency crews who rescued a woman from the first floor and a man from the second.

"They pulled the guy out and they tried to do CPR on the roof, but it wouldn't work so they brought him down and rushed him to the ambulance," said Raysheen Walker, neighbor.

Fire officials say crews put out the fire in 13 minutes.

The victims were taken to Temple University Hospital where the man later died.

A woman remains in critical condition. The three remaining victims have been treated and released.

Neighbors say five people lived in the home, including a woman in her 60s who struggled to get around.

"They good people. Quiet people. She had a stroke not too long ago," said Timmons.

"I was just hoping and praying she wasn't in the house, but if she was in there, my prayer are with her," said Thea Robert, neighbor.

As investigators looked for clues to the cause of the fire, neighbors watched, wishing they could have done more.