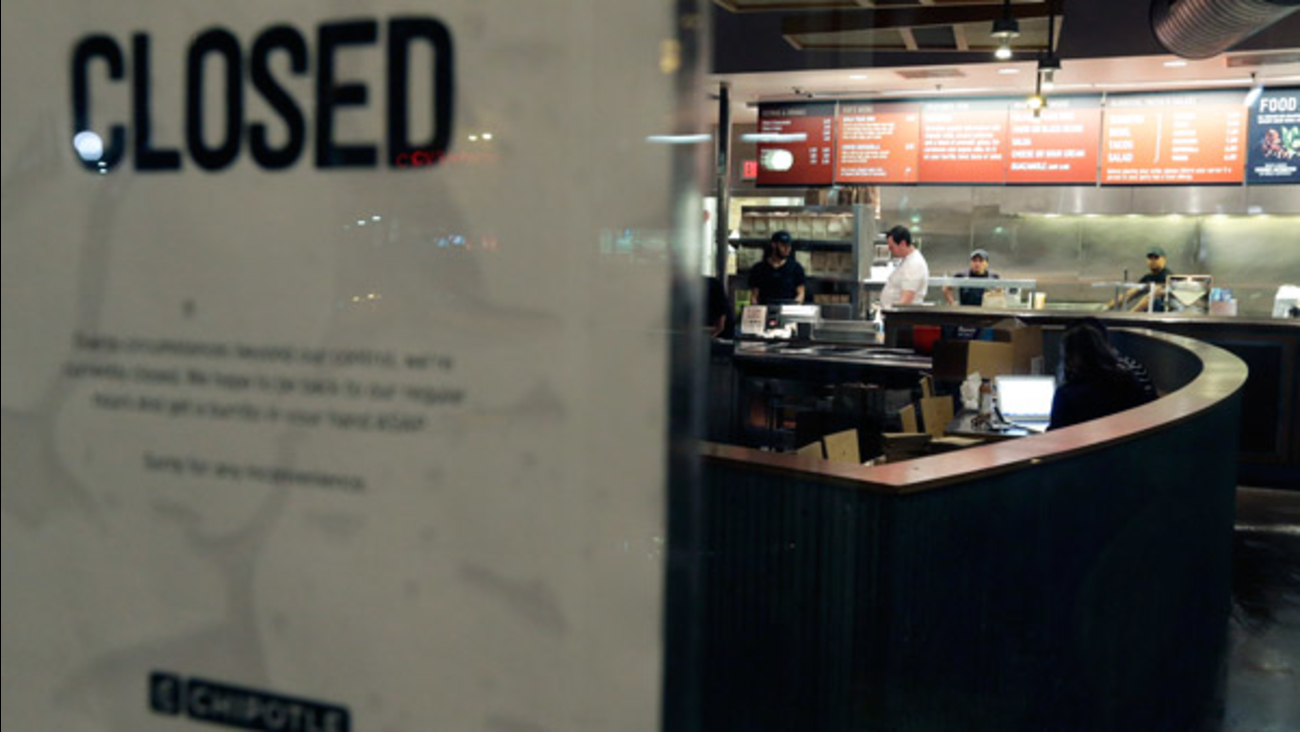 People stand inside a closed Chipotle restaurant on Monday, Dec. 7, 2015, in the Cleveland Circle neighborhood of Boston. (AP Photo/Steven Senne)

NEW YORK -- Chipotle said Monday that it temporarily closed a restaurant in Boston after several students at Boston College, including members of the men's basketball team, reported "gastrointestinal symptoms" after eating at the chain.

The school said it was working with local health officials to determine whether the illnesses were tied to an outbreak of E. coli that has been linked to Chipotle. A company spokesman noted that there have been no confirmed cases in Massachusetts, but that it was closing its restaurant in Boston's Cleveland Circle as officials investigate.

The closure of the restaurant comes after Chipotle had already warned that a key sales figure is expected to fall in the fourth quarter as a result of the outbreak. That would mark the first decline since the company went public in 2006.

In a filing with the Securities and Exchange Commission Friday, Chipotle said sales have been "extremely volatile" since early November when it closed restaurants in Oregon and Washington after the first cases were reported in those states. Sales plummeted by as much as 22 percent as additional cases were reported, and were down 16 percent for all of November.

For the fourth quarter, the company expects sales to drop between 8 and 11 percent at established locations if current trends continue. The figure, a key measure of financial health because it strips out the volatility of newly opened and closed locations, has not declined since the chain went public.

Chipotle's stock fell 7 percent to $513 in after-hours trading, after closing down 1.7 percent Monday. The stock is down more than 20 percent since mid-October.

The Centers for Disease Control and Prevention has said the outbreak has sickened 52 people in nine states. It has not yet identified the ingredient that made people sick. The most recent of the illness reported by the CDC started on Nov. 13.

About 48 million people get sick from a foodborne illness each year, according to the CDC.

Chipotle Mexican Grill Inc., based in Denver, had said that whatever the likely ingredient was that made people sick is out of its restaurants and that it is adopting stricter food-safety standards.

The company said some of its local produce suppliers might not be able to meet the new standards. Locally sourced produce accounts for a "relatively small percentage" of the produce the chain uses, said Chris Arnold, a Chipotle spokesman.

Jeffrey Bernstein, a Barclays analyst, noted that fast-food chains have recovered from similar foodborne illnesses in the past. But he noted the E. coli cases are "all the more damaging" for Chipotle because of its "Food With Integrity" slogan.