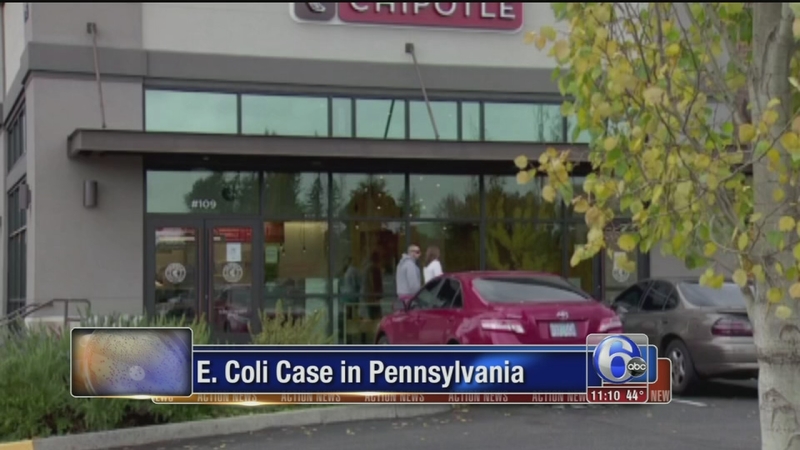 NEW YORK -- An outbreak of E. coli linked to Chipotle has expanded to nine states, with a total of 52 reported illnesses.

The Centers for Disease Control and Prevention said Friday seven additional people were sickened, including in three more states - Illinois, Maryland and Pennsylvania. The most recent illness started on Nov. 13, it said.

The majority of the illnesses have been in Oregon and Washington, where cases were initially reported at the end of October. Additional cases were later reported in California, Minnesota, New York and Ohio.

Of the 52 people infected, the CDC says 47 reported eating at a Chipotle restaurant the week before the illness started. The agency has not yet determined the ingredient that made people sick.

The CDC also said illnesses that started after Nov. 11 may not be reported yet.

People usually get sick from Shiga toxin-producing E. coli, the bacteria commonly associated with foodborne outbreaks, for two to eight days after swallowing the germ, according to the CDC. Most infected people get diarrhea and abdominal cramps.

The Denver-based chain known for touting the quality of its ingredients said it hired IEH Laboratories in Seattle to help improve its procedures. It said it will implement testing of all produce before it is shipped to restaurants and enhance employee training for food safety and handling.

Chipotle has not yet said how sales have been affected by the bad publicity from the outbreak, but plans to provide a financial update before a presentation for analysts and investors Tuesday. In October, the company had forecast sales at established locations would be up in the low- to mid-single digit percentages for 2015.

The company's shares fell 2.7 percent to $550.25 in trading Friday afternoon.

Chipotle said it tested ingredients before, but that it is moving to testing smaller batches and a larger number of samples.

"In testing for pathogens, in many ways you're looking for needles in haystacks. Through this high resolution testing program, we are making the haystacks smaller by working with smaller lots," the company said.

It said that no ingredients that are likely to have been connected to the incident remain in its restaurants or supply system.

Chris Arnold, a spokesman for Chipotle Mexican Grill Inc., said the company's local produce suppliers may not all be able to meet the new standards. The company noted that its local produce program accounts for a "relatively small percentage" of the produce it uses, and only runs from around June through October in most parts of the country.