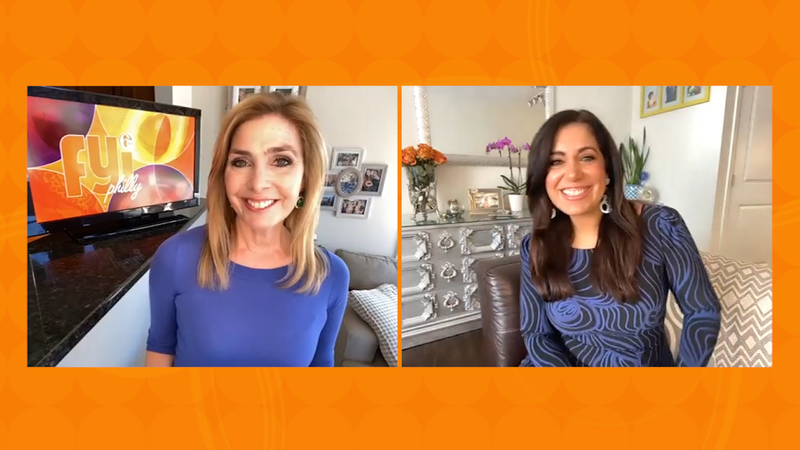 At Jezabels you can sit down and enjoy authentic Argentine food. Then go next door and you can buy a dining set similar to the one you just ate at.

She expanded into West Philadelphia and has now consolidated the business on 48th street.

Over the years she has grown from a cafe to now offering handcrafted furniture she designs and builds.

The restaurant has three spaces. The first is the cafe, focusing on takeout and delivery during the pandemic and featuring an array of baked goods and Argentine specialties.

She added an open kitchen where she teaches cooking classes and prepares the menu for the cafe along with her culinary team.

The third space is filled with home goods, hand-crafted furniture and local artisanal offerings. It doubles as a dining area and if you like the table, Jezabel will build you one.

A different chef is featured every day, from Asian cuisine to the Islands and beyond, creating a daily culinary tour around the world.

Chef Ange Branca had to close her James Beard-nominated restaurant Sate Kampar in May. Her new 'pivot venture' is considered unique -- even among her fellow chefs.
Kampar Kitchen is a way to have a rotating group of diverse chefs cook and sell the cuisines of their culture every week, offering them a new platform for their creations, and customers an opportunity to try some new foods.

Orders are cooked and picked up at a large kitchen space in The Bok Building.

A different chef is featured every day, and the cuisines are like a culinary tour around the world.

Hello Vietnam was a brand-new concept 3 months before the pandemic ...15 months later owner Julie Dinh is juicing up the menu to keep customers coming back.

Traditional Vietnamese dishes are still on the menu, but they have expanded their offerings with a juice bar stocked with various juices, teas and fresh dishes like acai bowls.

They also have partnered with Hip Hemp Cafe to carry a line of CBD-infused drinks. You will also be able to add CBD to the boba teas.

They offer a selection of Bahn Mi sandwiches, vegan dishes and items featuring fresh produce. Dinh is working on a Hello Vietnam bus that will launch this spring offering delivery around the Philadelphia area.

When she is not innovating new ideas, Dinh is saving cats in the neighborhood building shelters out of donated straw and Styrofoam coolers. She is renovating the building next to Hello Vietnam to create a space where rescued cats can live.

The chefs at Cicala at the Divine Lorraine make Pesto Alla Trapanese, a tuna-infused pasta dish they promise will transport you to Sicily.

How to make Pesto Alla Trapanese/Portofino Tuna sweepstakes
Cicala at the Divine Lorraine chef/owners Joe & Angela Cicala have partnered with Portofino Italian-style tuna to share delicious recipes with FYI Philly viewers throughout the month of March.

The recipes are simple but delicious and will make you feel like a top chef.
This week, the Cicalas make Pesto Alla Trapanese, a pasta dish they promise will transport you to Sicily.

Along with the recipe, you can enter for a chance to win Portofino Italian-style tuna products and a $50 gift card to Cicala at the Divine Lorraine. ENTER TO WIN: Portofino Tuna sweepstakes
Pasta with Pesto Alla Trapanese (Trapani-style pesto) Serves 4
INGREDIENTS:


DIRECTIONS
+ In a food processor, add olive oil, vinegar, garlic, and almonds. Pulse until roughly chopped. Add the tomatoes and basil. Pulse until the tomatoes are pureed. Add the pecorino and season with salt to taste. Pulse again to incorporate.
+ Bring a large pot of salted water to a boil and cook the pasta. Drain the pasta and toss with the pesto. Remove the tuna from the tin and crumble it into the pasta and toss once more to incorporate. Serve immediately.

Portofino Tuna Recipes | Facebook | Instagram
You can find Portofino in the canned tuna aisle at your Acme, ShopRite or Weis Markets. It's also available online at Amazon.

In the City of Brotherly love, we found some sister-run spots.

Avlos Greek Cuisine and 3rd Element Spa & Salon double down on sister power
We found two businesses in the area, each run by sets of sisters.

At Avlos Greek Cuisine, Nikoleta and Katerina Skartsila went with chef Nicole's dream to have her own restaurant featuring the Greek food they grew up with in a small village near Mount Vesuvius.

They opened just before the pandemic hit, so they had to close almost immediately. Now, back with dine-in and takeout options, the sisters say the community of Phoenixville never stopped supporting them.

They are full-service, offering everything from hairstyling, manicures and pedicures, to massages. They say they actually gained more clients during the pandemic, with people prioritizing self-care.

The sisters grew up not far from where the salon is, so they say it really is 'home', and they want customers to feel like they are family.
Avlos Greek Cuisine | Facebook | Instagram
258 Bridge Street, Phoenixville, PA 19460
610-455-4110

Enlighten your senses with these women-owned businesses, freshening up your home décor with aromatherapy.

She's been making candles for 10 years as a side hobby for family and friends.

A few weeks into the COVID-19 lockdown, she decided to make her hobby official, launching Cumberland Street Candles, and introducing what has become one of her top-sellers, Stress Relief.

In the summer, she presses down flowers from her garden and makes oils. One of her unique conceptions is an upcycle custom-made 'beer can candle.'

Amina Mack started Lucky 13 Candle Company as a way to give back and de-stress, but she also wanted her products to have a twist.

They're two-in-one massage candles, that leave no residue. Mack is a lawyer who learned how to make candles on YouTube.
She handcrafts her creations using all-natural ingredients and offers about six main scents. Peaceful Sleep includes lavender essential oil, Tranquility is lavender and peppermint, Positive Thoughts lavender, yang yling and a Touch of Paradise is eucalyptus.

Each month, she donates a portion of proceeds to a local non-profit organization.

As for the name, Lucky 13? Amina's birthday falls on the 13th and she believes the number 13 is actually a lucky number.

A daughter's promise to her dying father is being fulfilled through Salvation of Sorrows, a traveling bus offering free haircuts for homeless.

Abby Anderson began Salvation of Sorrows in 2016 after her father passed away.

He had been living homeless in South Carolina, a veteran suffering from alcoholism.

Anderson brought him home to Philadelphia but five days later he died. She made a promise during that short time to give haircuts for the homeless and she is now living that promise.
Her husband Chris is the barber and they travel all around Philadelphia and beyond, offering a sense of dignity and charity to those less fortunate.

The play follows a jury of six, deadlocked for over a week, and examines the mindset of jurors examining the case.

"Hearing it is a completely different experience," says Director Amina Robinson. "We don't have the costumes to help tell the story. Literally, it's just what we're doing with our voices."
The story was inspired by Philando Castile, the Black motorist fatally shot by police during a 2016 traffic stop in Minnesota.

The play follows a jury of six, deadlocked for over a week, and examines the mindset of Black and white jurors examining the case.

Karen Rogers offers an exclusive look at this weekend's show.

There are about 20 flavors to choose from including favorites like black and whites, chocolate chip and iced oatmeal. But there's a new cookie on the menu that's getting a lot of buzz-the ruby chocolate cherry cookie. Ruby cherry is white chocolate with a fruity flavor that makes it even more delicious.
You can buy the cookies at Famous 4th Street's bakery in East Falls and at the Reading Terminal Market or order online and have them shipped right to your door.

Bridget Foy's has officially reopened its doors. The restaurant, at 2nd and South Streets since 1978, was gutted by fire three years ago. Owner Bridget Foy opened an outdoor pop-up cafe earlier this year but is now serving dinner and brunch inside.

Looking to spice up your home workouts?

Noel Davis of Paris Fit Studios in Old City is offering a Gym in a Box. The compact box is packed with everything from weights to resistance bands, a jump rope, Swiss ball and fitness sliders.