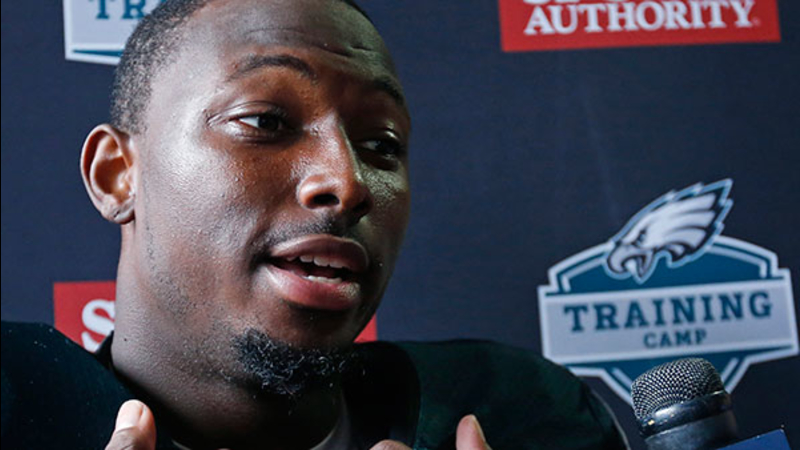 PHILADELPHIA (WPVI) -- Philadelphia Eagles running back LeSean McCoy has responded to the tipping controversy that has heated up the internet this week.

"The 20 cent tip was kind of a statement," McCoy told reporters Thursday afternoon during a scheduled press conference. "I didn't do anything wrong and if I had to do it again, I'd do it the same way."

The controversy began after the owner of PYT, a Northern Liberties restaurant know for unique burger combinations, posted an image that allegedly showed a tiny tip left by McCoy to Facebook. 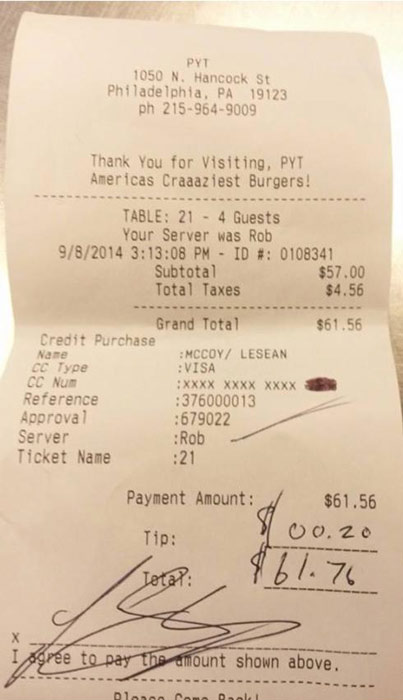 This image was posted to the PYT Facebook page depicting a $.20 tip, allegedly left by Philadelphia Eagles running back LeSean McCoy.

"Just to be honest, like I'm always, I tip on my service. I think there's a difference between good service and bad service or just having a bad day. There's a big difference with just being rude and disrespectful. That's how that went," McCoy said.

On the original post, PYT wrote a sarcastic message saying the tip is "going to come in really handy for that new official NFL McCoy jersey our waiter had his heart set on" and "That is a .03% tip. New record!"

McCoy pointed out that he is a good tipper.

"In any restaurant I go around in Philadelphia, I tip very well. I'm very respectful," McCoy said. "You can't be disrespectful and just expect somebody to tip you. I don't' care who the person is. That's why I left my card, so they could see my name. Simple as that."

Some commenters on the Facebook post were angry with the decision to post the receipt, with one reading "Bad form PYT. Posting this is disturbing and unprofessional."

"If you check on that restaurant, the backlash that has from everybody talking bad about that place, but good food, good food," McCoy said.

On Wednesday, PYT's owner, Tommy Up, said he stands by the decision to post the receipt - a decision he made.

The statement, posted to the PYT Facebook page on Tuesday, reads:

A MESSAGE FROM THE OWNER:

I would like to address the LeSean McCoy tipping situation and our role in it.

For starters, I take total and complete responsibility for sharing this receipt. It was not our server's decision, it was mine. I am to blame.

I decided to take action after some serious thought. And while I'd like to apologize to Mr McCoy, I cannot in good conscience do so. I stand by my actions one hundred percent.

Mr McCoy and his three companions came into my place on Monday afternoon, and immediately the whole staff was excited. Mr McCoy is a skilled athlete and is one of our beloved Philadelphia Eagles. A true Philly legend and a sports hero. Understandably my staff was really pumped, especially on the heels of they terrific win the day before. (Go Eagles!).

Mr McCoy and his friend sat inside at a booth next to my management and next to me. They were given excellent service. Impeccable service. If anything, our server was a little nervous as was our food runner, because they are big, big fans.

He and his group, from the moment they sat down, were verbally abusive to our staff in the most insulting ways. The derogatory statements about women and their sheer contempt for the staff serving them wasn't the end, however. After Mr McCoy and his group left I looked over and saw their server, my friend, with his head bowed down and with a very confused look on his face. I took the receipt out of his hand and I couldn't believe that anyone could be so callous. Mr McCoy had left a .03% tip for our staff. Our staff that was beyond excited to see him walk into our burger joint and was excited to serve him. That's twenty cents on a tab of over $60. Twenty cents that our server has to split with the food runner and the bartender. Two dimes from an insulting multimillionaire.

I bet Mr McCoy is usually an awesome dude. And everyone has their bad days. But I'm from Philly and have had the pleasure of meeting many of our bad ass sports heroes. Ron Jaworski I met as a kid and I love. Iverson I loved. Mike Schmidt! You name 'em. I love all of our athletes past and present. Hometown heroes who treat those below them with some respect. And maybe Mr McCoy was having a "bad day" after his big victory all that, but the reports of him receiving "bad service" is a complete slanderous lie, and my crew here is better than that and deserves better than that.

At the end of the day, I did what I felt my heart told me to do. And I don't want anything from Mr McCoy, but...maybe an apology to his server who gave him excellent service would be cool.

Hate mail should be directed to tommy@pytburger.com. I will respond to you right after I catch up on this mornings hate mail.
Actor Charlie Sheen, meanwhile, pledging to give $1,000 to the PYT waiter.