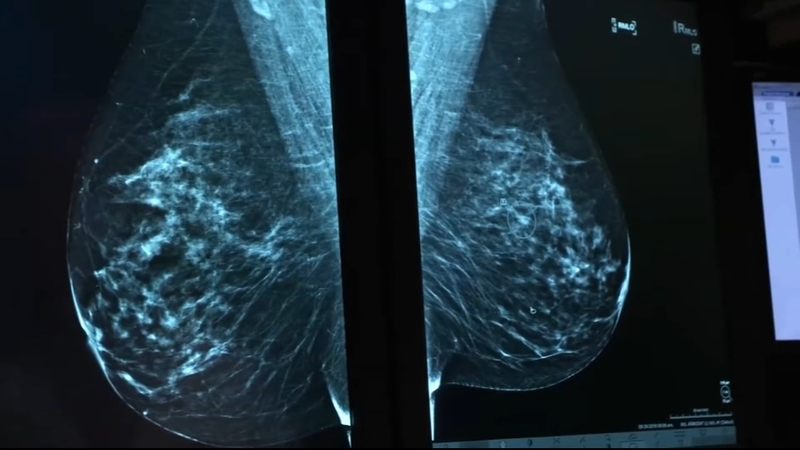 PHILADELPHIA (WPVI) -- A new tool in breast screenings is giving doctors a more precise image of what is going on inside the body. The screening takes longer to do but doctors and technicians say it is well worth it.

Fox Chase Cancer Center has a new tool in its arsenal for breast screenings. It is called Molecular Breast Imaging or MBI.

"The MBI is a test that uses a radioactive tracer to find breast cancer," said Jean Hummel, who is the supervisor of mammography.

The machine looks like a mammogram machine, but it is different, in that the images are more precise. It is especially helpful for women who have dense breasts.

"Breast cancers can hide in that dense breast tissue or that white tissue that shows up on the mammogram because most breast cancers appear white on the mammogram same as glandular tissue and so it can be what we call masked by breast density," said breast radiologist Dr. Catherine Tuite.

The test itself is simple but a bit longer than a traditional mammogram, about 40 minutes total. The patient is injected with a very small amount of radioactive material.

"It is just enough to get a picture of the body and it's in and out of their system fairly quickly," said Donna Mosley, supervisor of nuclear medicine.

The MBI unit has two square cameras one above and one below.

"The patient will fit their breasts inside that, and the two camera heads come down, it doesn't suppress them like with a mammography, so it's not pressing hard, it's just barely touching them. And then we get like an image of the breast," said Mosley.

It can also be used to evaluate treatment response in women undergoing chemotherapy and to diagnose something that may have come up vague on a traditional mammogram or ultrasound.

Women who are pregnant are not eligible for molecular breast imaging but women who have implants can have the test.
Report a correction or typo
Related topics:
health & fitnesshealthbreast cancer awarenessmoves in medicine fcccwomen's health
Sponsored Content
Copyright © 2021 WPVI-TV. All Rights Reserved.