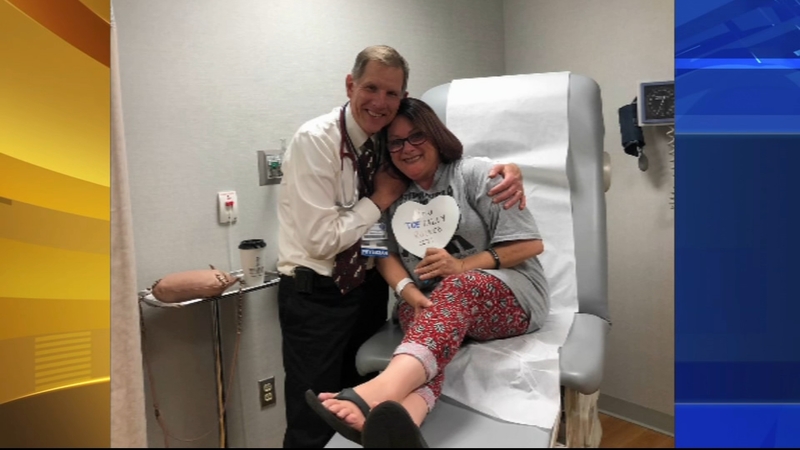 PHILADELPHIA (WPVI) -- We often take the miraculous medications used every day for granted. But without clinical trials, they wouldn't exist.

One Montgomery County woman credits one of those new drugs in saving her life.

"It was on my toe. And nobody would ever think toe cancer," said Stephanie Heart of Harleysville, Pennsylvania.

"By the time I found out what it was, unfortunately, it was Stage 3, which meant it was in my lymph nodes," she said.

Heart was in a race against a rare form of melanoma, one that took the life of reggae star Bob Marley.

When doctors at Fox Chase Cancer Center amputated part of Heart's toe, the melanoma was already in her bloodstream. So they put her on full-body immunotherapy.

"It boosts your immune system up to recognize the cancer cells that it normally wouldn't recognize. And it just rapid fires at them," she said.

Oncologist Dr. Anthony Olszanski said immunotherapy was possible thanks to thousands of patients who volunteered for years of clinical trials. He said the trials reap so many benefits.

"Sometimes we find medications which really do look like they're targeting something that we've not been able to target before," he said. "Clinical trials can offer hope, in a situation where they might not have other treatment opportunities."

But they aren't just for patients running out of options.

"Clinical trials are for everybody, regardless of what stage of cancer they're in, or what phase of their treatment they're in," he said.

Tight regulations ensure patients are informed of what's happening and why at every step.

"We have to follow these protocols and not deviate one way or the other," he said.

Heart credits the clinical trials with creating the drugs that saved her life.