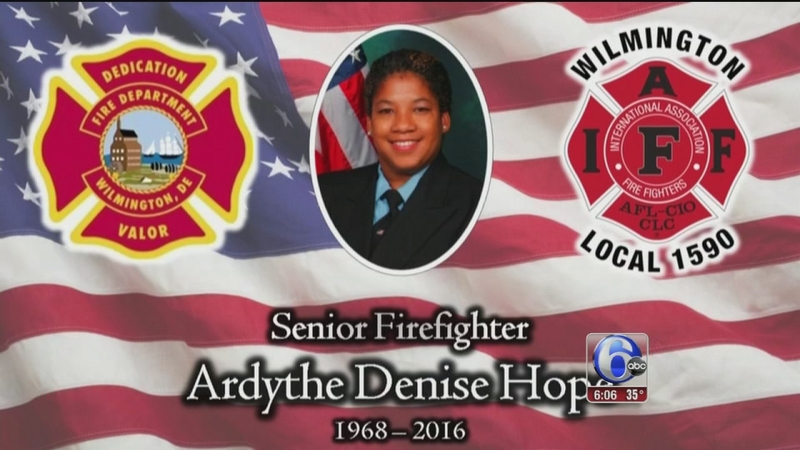 Draped with the flag atop Engine 5, Hope's body was escorted by police through the streets of Wilmington, a city she served as a firefighter for more than two decades.

Her brothers in the department carried the body into the Chase Center for a public viewing.

A montage of photos began the funeral service.

There was then a presentation of the colors. U.S. Sens. Tom Carper and Chris Coons and Gov. Jack Markell were among those to pay their respects to the mother of three. Her three daughters sat solemn in the front row.

"Today will be a celebration of live and service for our Ardy. Everyone who knew Ardy knew how much she enjoyed celebrations, especially this time of year," said Wilmington Fire Marshal William McKim.

"Ardy was intelligent, a caring person whose life revolved around service to others," said Wilmington Fire Chief Anthony Goode.

The 1900 block of Lakeview is where two firefighters died, and where Hope was critically injured in late September.

Action News visited the site where flags and flowers have been placed on a fence. One sign reads, "RIP Ardy Hope. You are loved and missed, hero!"

Hope was fighting a blaze when the floor of the row home collapsed. Hope, Lt. Jerry Fickes, Capt. Christopher Leach and firefighter Brad Speakman plummeted into the flames. Only Speakman survived.

Firefighters like Hope risk their lives everyday. The quote inside the Chase Center captured the loss: "All gave some. Some gave all."

"It's been said firefighters never die. They just burn forever in the hearts of the people whose lives they saved, and in the case of Ardy, in the hearts of all of those touched by her heroism," said Gov. Jack Markell (D-Del.).

Three Wilmington fire stations will be renamed in honor of the three firefighters.