Future of youth football league after man shot in Millville

WPVI
By Jeff Chirico
MILLVILLE, N.J. (WPVI) -- Players and coaches continue to support each other in the face of tragedy, but tonight the season is being suspended.

At a team meeting, parents and community members are discussing the future of the Millville Midget Football League after 37-year-old Joseph Jones was gunned down as he left the practice field with his godson Thursday night.

Burks says safety concerns prompted the league president to suspend the season indefinitely Friday. But coaches, parents, and players at the meeting expressed hope that the decision will be reversed.

"He's been playing since he was 5 years old. I wouldn't want him to stop," said one parent.

"We want everybody to know it's an isolated event. It's not normal what went on with our football organization so we just want to get the reassurance of our parents and our players that they felt safe and wanted to continue with football in Millville," said Burks.

Witnesses say while players and parents were heading to the parking lot, two men shot Jones in his car with two children inside. Then took off running.

"They were dressed like ninjas. One had 9 millimeters, one had an AK 4. He put the gun inside the vehicle and shot round like that," said witness Stormy Mears.

The Cumberland County Prosecutor assured parents this was a targeted attack and asked for witnesses to speak up.

Jennifer Webb-McRae said, "They need to know that no piece of information is too small to plug into the puzzle to solve this crime."

Meanwhile, Sadie Cordova says she and her two sons are heartbroken for Jones' family but doesn't think canceling the season is the right answer.

"I just hope they don't discontinue the football. Football is the main thing these kids have out here," said Cordova.

The coaches and leaders will be meeting in the coming days to determine the future of this league.

The prosecutor says they are working hard to solve this crime, and offering help to the families by providing counseling for any players who have been traumatized. 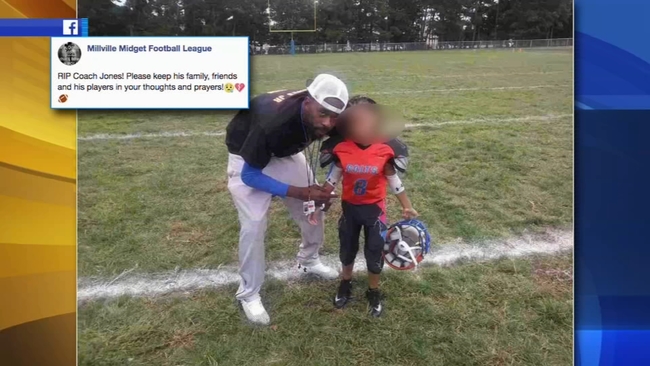