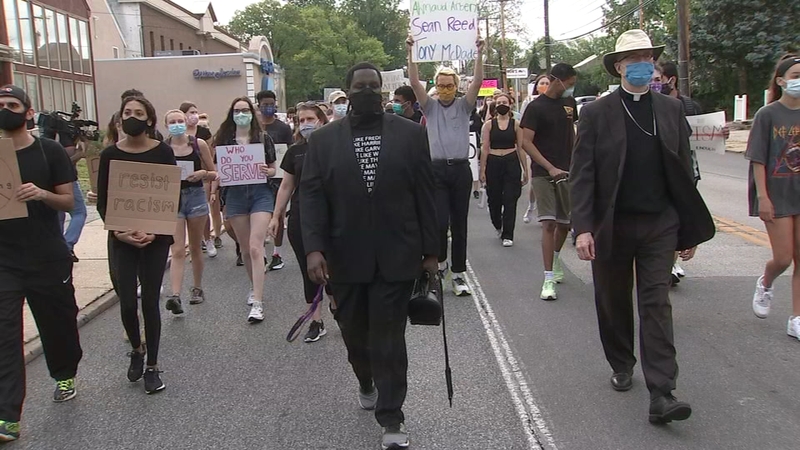 NARBERTH, Pennsylvania (WPVI) -- Families in the Philadelphia suburb of Narberth took part in a silent protest to voice their concerns and push for equality following the death George Floyd.

Families stressed that their concerns shouldn't be overshadowed just because they don't live in the city.

Starting soon:
People in the #Philadelphia suburb of Narberth say just bc they don’t live in the city where there have been huge crowds doesn’t mean their concerns should be overshadowed. @6abc pic.twitter.com/5yb7ieCKY7

Each person behind a mask came from different backgrounds and experiences, but the families shared a unified message against inequality.

Smith is leading the way in the community effort to raise awareness after the country ignited in protest following the death of George Floyd.

Smith said their silent protest is an opportunity to not only speak out against police brutality, but to also inspire kids of the next generation, like his teenage son, Josh Smith.

"We want to make the connection between the city and suburbs to spread the message that this is not okay," said Josh Smith.

The want for equality as he grows up is shared among others his age.

"I want to be treated fairly. I want to be able to walk with my white neighbors and friends and not be looked at as a target," said Kyler Barnes.

Their concerns are being heard as many in the crowd say they will not be silent.

"We need as white people, need to work to support the people that have been systematically disenfranchised by racist structures and that it isn't enough to be an ally. We need to be anti-racist," said Shayna Kalish.

"There's a lot of divisiveness in our country and it often is framed as an urban vs rural or an urban vs everywhere else and that's not the case. Just because I don't live in Center City, doesn't mean that we don't want to stand up," said Kalish.

The conversations around the issue have proven to be inspiring to many people and they say this is a huge step in the right direction.

"Awareness is one thing; action is something else," said David Smith.