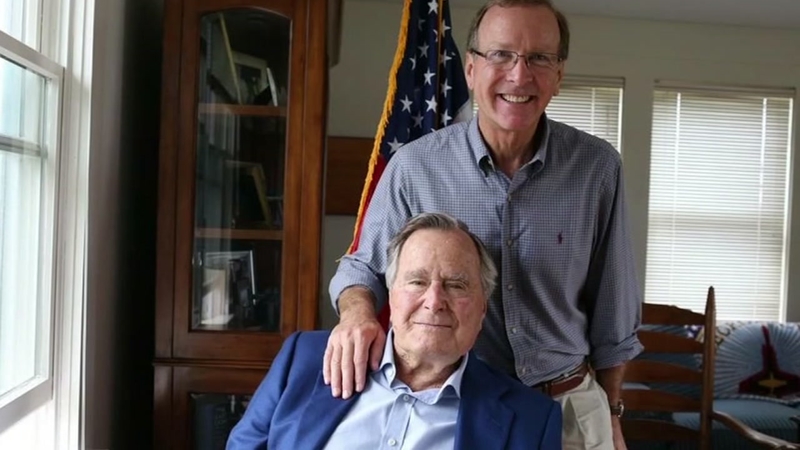 HOUSTON, Texas -- Former President George H.W. Bush was a public figure to most of us, but to Pierce Bush, he was just grandfather.

"To me, my grandfather was simply the world's greatest grandfather," Bush told reporters Saturday night.

He and his father, Neil Bush, stepped outside the gate to the neighborhood near Tanglewood where the 41st president lived for decades with his wife, Barbara.

President George H.W. Bush's son, Neil, fought back tears as he talked about his father.

The father and son wanted to express their gratitude for the immense support from around the world, but especially to those in the Bush's beloved hometown of Houston.

"They loved the people here. Anybody who would ask my dad for a picture, even when he was in a wheelchair, he would stop and graciously give it to them," Neil said through tears. "He would treat everybody in Houston the same, with the same amount of respect. He loved Houston."

Neil, the fourth child of six children of George H.W. and Barbara Bush, was with his father in his final moments.

"To see him, and to be with him and to touch him as he passed away. To see him in comfort. It was just a blessing," he said, adding that every one of Bush's 17 grandchildren and five children spoke to him in his last days.

"I've never seen him be mean. He always responded with kindness. He led by example," said Pierce.

"I feel extraordinarily blessed to have been influenced by and living in the shadow of a great man who's left an amazing impact on my life and our family life and the lives of many millions of people around the world," said Neil. "We're celebrating a life that was so well-lived."