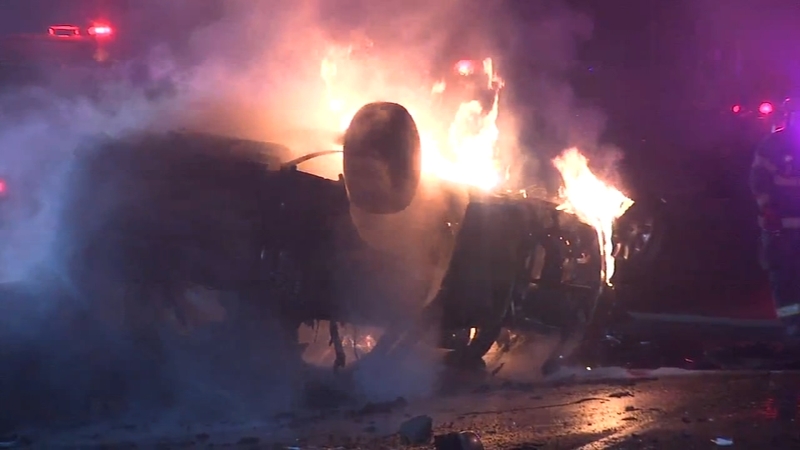 EAST FALLS (WPVI) -- A driver is in critical condition after he was pulled from a minivan that burst into flames following a crash on the Roosevelt Expressway in the East Falls section of Philadelphia.

The crash happened around 2:30 a.m. Wednesday near Fox Street.

Good Samaritan John Michulka was driving his tow truck in the southbound lanes when he came upon the crash.

"I immediately spun around to check on the guy because there was literally no one else on the highway," Michulka said.

Michulka arrived on scene and saw the driver was trapped. That's when Mike Conway also pulled over.

The two and third good Samaritan moved into action.

Michulka and Conway explained to Action News what happened next.

"I am definitely worried this thing is going to blow. I was just thinking it could be my sister, my mother, my dad, you know. I just said a quick silent prayer and said let's get this guy out of there," Conway said.

"I literally seen that the gas tank was right next to the fire, my first reaction was to get him out of the car," Michulka said.

Conway says he then hit the seat belt release and the two men grabbed the injured driver pulling him to safety. He was semi-conscious and a nurse tended to him on the roadway.

"Sixty seconds later, the car like blew up," Michulka said.

Police say the the driver is expected to make a full recovery, in part, because of these good Samaritans.

"I feel good, a lot of people called me a hero. I don't feel like I am a hero, I did what I feel was right," Conway said.

The cause of the crash is under investigation. The name of the driver has not been released.