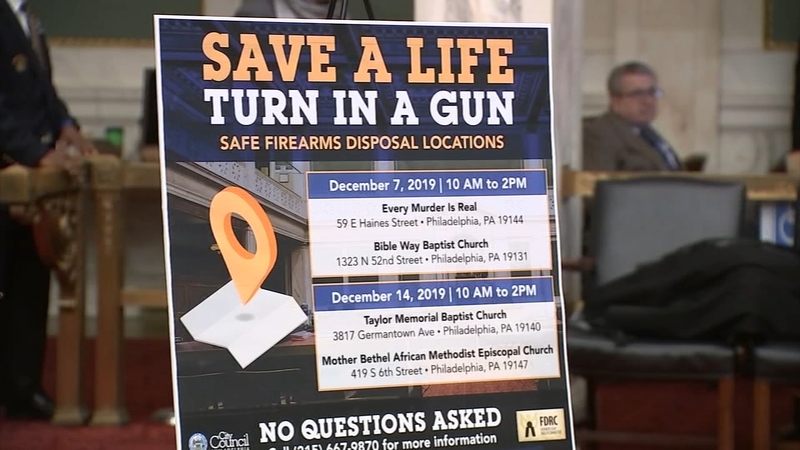 PHILADELPHIA (WPVI) -- City leaders in Philadelphia acknowledge that there is a gun violence problem and they are working to decrease the violence.

"107 individuals under the age of 18 have been shot in 2019...that is a number that is unfathomable," said Darrell Clarke, Philadelphia City Council President.

The purpose of the effort is to have individuals exercise personal responsibility in identifying guns in their residences, and turn them in at safe locations in the city, no questions asked.

The city says the home gun check campaign comes in response to a wave of recent incidents of gun violence in Philadelphia, particularly shootings involving children.

A 2-year-old girl was shot and killed by a bullet that went through the window of her family's Kensington home.

An 11-month-old boy was shot and critically wounded during an alleged dispute between drug dealers.

A 10-year-old boy was shot in Frankford as he walked home from school.

Last week, a 16-year-old girl was shot and killed as she got off a SEPTA bus in North Philadelphia. The victim, Ceani Smalls, was the 106th person under the age of 18 shot in Philadelphia in 2019. Overall, more than 1,350 people have been shot in the city this year.

"My son got ambushed and got shot in the head twice and in the chest and he had five children, a big family," said Stanley Crawford, with the Black Male Community Council.

Crawford says his heartbreaks to hear about the recent violence across the city that has killed and injured young children. He believes the home gun checks and safe disposal project will work.

Councilmembers and anti-violence activists say that home gun checks and safe disposal are just two strategies that residents can embrace in helping to fight an epidemic of gun violence in Philadelphia.

City council has passed various gun violence prevention measures, including legislation prohibiting guns at city recreation centers, a lost or stolen handgun reporting law, a law making it easier for those seeking court orders removing guns from individuals deemed a danger to themselves or others, and legislation requiring gun owners to keep their firearms safely secured in locked containers in homes where children reside.

The locations, dates and times announced today for safe firearms disposal are as follows: