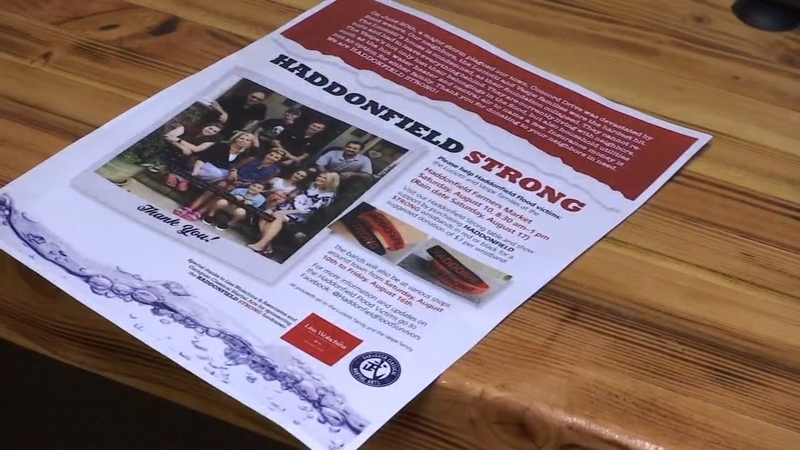 HADDONFIELD, New Jersey (WPVI) -- Neighbors and businesses in Haddonfield, N.J. are coming together to raise money for families devastated by June flooding.

The flooding back in June caused about $2.5 million in damage in Haddonfield and hit two families particularly hard.

"I've never even met them, said Reece Wilke, owner of Garaguso Classical Martial Arts. "But so many of my students know them. Grew up with them, went to birthday parties at their house. So it was like - how can I not help?"

Wilke is one of the business owners raising money as part of the Haddonfield Strong initiative.

It supports the Luciotti and Vespe families who live on Concord Drive - who were devastated by the floods.

Bob Hochgertel of King's Road Brewing Company is another one of the business owners involved.

"I was impacted by the flood. I actually lost my entire finished basement, my kids playroom, my laundry room," said Hochgertel.

But he says that's nothing compared to what others lost. His brewery created a special beer to support the cause: a pale ale called "Persistent One 08033." That's Haddonfield's zipcode.

"When one of us is in need, it seems that everyone rises to the occasion. This is not the first time nor will it be the last time that it happens in this town," said Hochgertel.

Haddonfield Strong bracelets are being sold at shops around town.

Thursday from 4:00-7:00 p.m., participating downtown businesses will donate a percentage of sales to the fund. They're calling it a "Flood of Support."

Organizers say they hope to turn this effort into a full-fledged non-profit, creating an emergency fund for neighbors affected by any disaster.

"You never know when you're going to be in need. It could be me tomorrow. People get really comfortable. We want to be careful not to get so comfortable that we're not ready to help others," said Wilke.

Both families are trying to move forward.

The Luciotti's are still staying elsewhere, with the foundation of their house washed away.

The Vespe's, who were living in a camper in their yard, are now back in their house but still dealing with massive expenses.