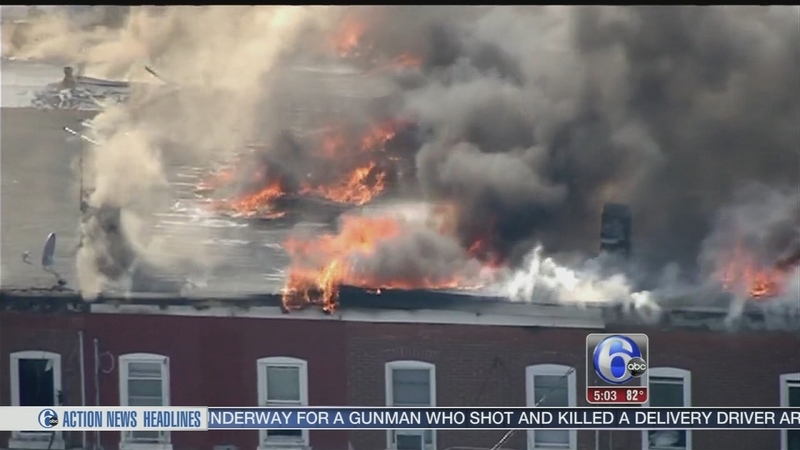 "I'm not sure the process they were using, but somehow the torch got to dry wood and ignited that," Hamilton Township Fire Chief Thomas Gribbin said Tuesday.

Dozens of residents spent Tuesday morning picking up the pieces after the 6-alarm blaze.

The fire broke out around 3:45 p.m. Monday on the 1700 block of East State Street in Hamilton Township.

"It moved fast. We ran out of personnel quickly. We couldn't get them on scene fast enough, that's how fast it was running," Gribbin said Monday night.

As many as 175 firefighters from as far as Burlington and Hunterdon Counties were called to service to help put out the blaze.

Terrified residents scrambled to get out of their homes.

"It started like four doors down. By the time we got out and got the dog out it was already at my house. That fast," resident Marsha Jackson said.

Resident Alice Leach had only seconds to get out.

"When I walked out then I turned around and I just was overwhelmed with what I saw," Leach said.

Residents tell investigators there were men working on the roof shortly before the fire broke out.

"He was on his blowtorch on top of the roof," resident Kareem Dockery said.

By the time the fire was brought under control, as many as 20 homes were damaged, 15 of them heavily.

Some residents lost everything, though there was one bit of good news on Tuesday.

Once firefighters heard 8-year-old Aniya Prescott was in tears thinking her fish had died in the fire they went in and saved them.

It was an effort for which Jose will be eternally grateful.

"You don't know how it feels. I feel so good. It's all beautiful. I just wanted this, that's all I wanted," Rios said.

For Hamilton firefighters, it was the end of a very tough day.

Only two hours earlier they were battling a 3-alarm fire in the 100 block of Waverly.

Exhausted firefighters tried to cool down wiping their faces with towels.

"You got two multiple alarm fires and the guys are already pretty much spent from the first one," Gribbin said.