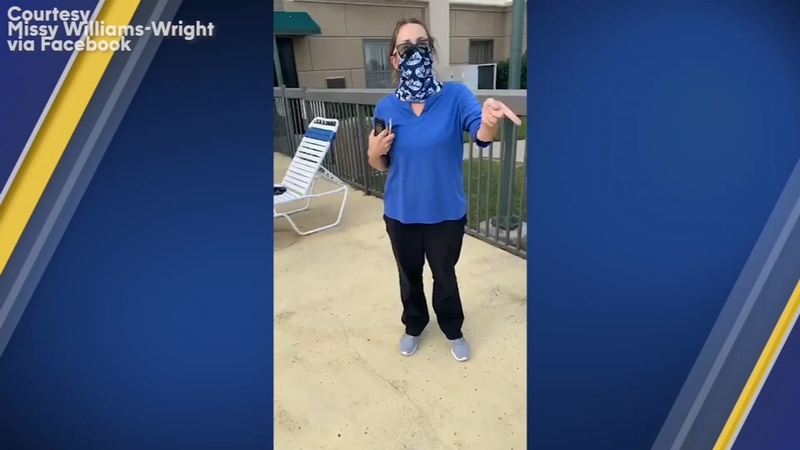 WILLIAMSTON, N.C. -- An employee at a Hampton Inn in North Carolina no longer has her job after an incident the hotel's parent company Hampton by Hilton considered to be fueled by racism and discrimination.

Hampton by Hilton has zero tolerance for racism or discrimination of any kind. pic.twitter.com/1Wc7uidoOU

It happened June 26 at the Hampton Inn in Williamston, North Carolina.

Williamston Police Department said officers were called by hotel staff to handle a case of trespassing.

The staff member who called police told the officers that she found two children swimming in the pool unattended.

According to the police report, she asked the children who they were with and the children pointed to a car nearby where she located their mother.

The worker told police that she asked the mother, Anita Williams-Wright, what room they were in, to which she replied she did not have to provide that information and that "she was done talking to her."

At that point, the worker told Wright she would call the police.

When officers arrived, they asked the worker what she wanted to do about the situation.

In the police report, she is quoted as reading from her phone that "her manager wanted the people arrested."

Williams-Wright began filming the incident when officers arrived to investigate.

In the video, she can be seen showing her room key card and explaining why she was not going to give her name and room number.

"Once I proved that I had a room, that was for you to walk away," Williams-Wright said to one of the officers. "I did not commit a crime. You are degrading me like this in front of my kids. They are trying to enjoy themselves in the pool."

The responding lieutenant told Williams-Wright "it did not matter what color skin she had and again asked what room she was in."

Williamston Police Department said the hotel chain uses the same type of key card in all of its locations. However, Williams-Wright said in the video that she was willing to prove that the key card was active and worked.

Officers instead found her car in the parking lot, ran her vehicle's information to confirm her identity, and then verified that she was a registered guest at the Hampton Inn.

Williamston Police Department said it has started an internal investigation into its response to the call.

Hampton by Hilton said that it got in touch with the owners of that property over the weekend and learned that the worker was no longer employed at the hotel.

"We remain in contact with the hotel's ownership about follow up actions and to ensure that in the future, their employees reflect the best values of our brand and are welcoming to all," the company said in a statement.
Report a correction or typo
Related topics:
societyncracial profilinghoteldiscriminationswimmingracism
Copyright © 2022 WPVI-TV. All Rights Reserved.
TOP STORIES
Officials ID 5 killed in Pottstown explosion; most were children
AccuWeather Alert: Drenching Downpours Tonight
Official admits police made 'wrong decision' in TX shooting
Police: Store owner robbed, assaulted with brick in North Philly
Dann Cuellar retires after 34 years at Action News
Another Trenton, NJ firehouse hit by gunfire
Rainy start to Memorial Day weekend at the Jersey Shore
Show More
Bank employees help kidnapped woman after she asks for loan
Massacre survivor says gunman told them: 'You're all gonna die'
4th grader 'did what she had to to survive' Uvalde shooting, aunt says
North Penn holds farewell parade for retiring superintendent
NJ students stage walkout to honor victims killed in Texas
More TOP STORIES News