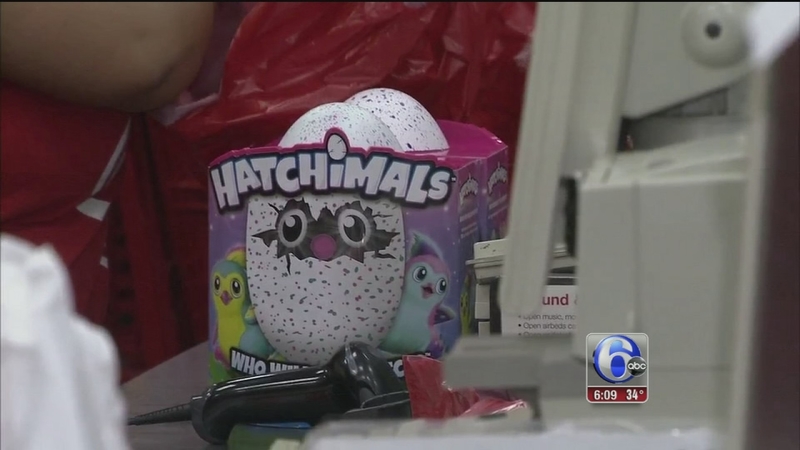 PHILADELPHIA (WPVI) -- Hatchimals, this season's hottest holiday gift, are, of course, the hardest to get your hands on.

Several Target stores got a new shipment in Sunday, and, despite the frigid temperatures, lots of people spent the night outside, waiting for that special delivery.

For parents, grandparents, uncles and aunts, the search has been intense.

"She's been crazy about this Hatchimals since it first hit the internet," said Sam Robinson of Southwest Philadelphia.

"You gotta nurture them, and then they crack open and grow emotionally, or something like that," said Byron Marshall of Cherry Hill, New Jersey.

Target announced they had a new shipment that would be released in stores today. That's all gift-givers needed to hear. They piled on their layers and they got in line. In Cherry Hill, in Wynnefield Heights, customers waited and hoped.

The rare Hatchimals were available Sunday morning at Targets in the area.

"I have to be at work. But I'm here right now. Twenty-hour hours I've been up. Twenty-four hours. I've been here since 2," said Jasmine Baldwin of Berlin, New Jersey.

"I've been here since 11 p.m. last night. Picking up a Hatchimal for my niece, Alana. She's 6 years old. It's the one thing she wants, and the one thing nobody can get," said Darren Guerra of Pennsauken, New Jersey.

When the sun came up, the Target team came out, tickets in hand. The supply was limited and merchandise was capped at two Hatchimals per guest. Ticket holders headed inside, the rest went to their cars.

The line filtered in to the customer service desk, where the eggs were neatly stacked, waiting for a new home.

Hatchimals in hand, it was time to go home and wait for the big reveal.

"I'm done with this. It's too cold out. My toes hurt. I'm going to go watch football," said Justin DeGuzman of Pennsauken, New Jersey.