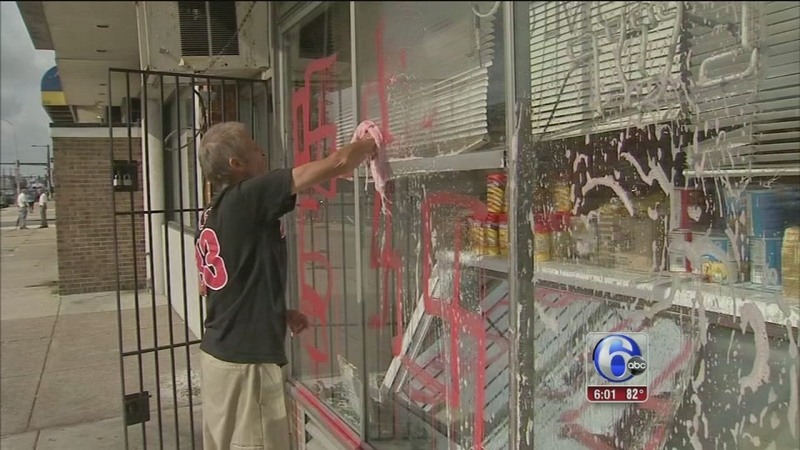 NORTHEAST PHILADELPHIA (WPVI) -- The owner of a kosher meat shop in Northeast Philadelphia arrived Thursday morning to find symbols of hate painted all over the windows.

That was the reaction when people saw the mess on the windows of Simon's Kosher Meats - blood red swastikas covered the windows,

They were also painted on the rear of the store.

"I pulled up and I saw that, it's really upsetting," said Merryl Landers.

Detectives scoured the area for evidence and video surveillance.

Police say they have no suspects but, they are investigating this as a hate crime.

"Certainly on 9/11, we're concerned about things like this happening and we're looking into the possibility that it's related in some way - something to do with 9/11," said Captain Frank Palumbo.

Simon Rachshtut, the owner of the store, feels the hate that the swastika symbolizes. His family fled Ukraine ahead of the Nazis in 1941.

"This is very bothering. This is personal, I feel very bad. This is such a shame, this is no good - not in America," said Rachshtut.

As a worker washed away the swastikas, neighbors wondered what has become of their community.

It is a melting pot of cultures and religions that has peacefully coexisted for years.

Some find it hard to believe they've been hit with a hate crime. However even if it was nothing more than juvenile mischief, it's had a sickening impact.

"It's mischief. It's misplaced mischief, it hurts, it hurts," said Kurtz.

Fortunately the paint used was water soluble and was easily washed away.