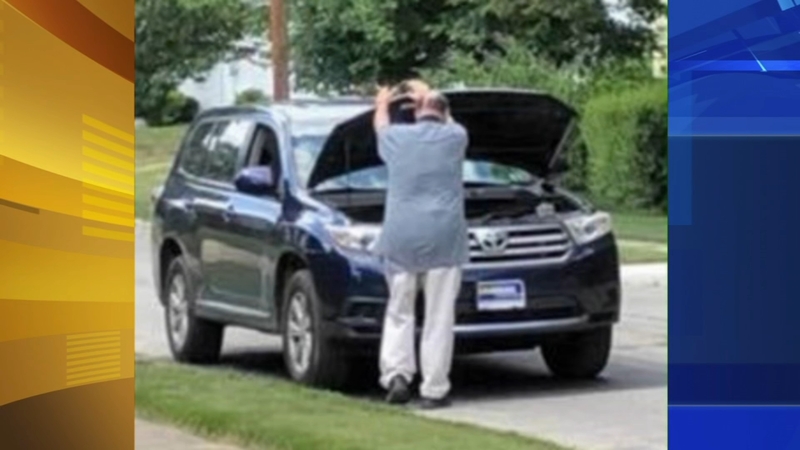 HAVERFORD TOWNSHIP, Pennsylvania (WPVI) -- Haverford Township police are warning motorists to be on the look-out for a stranded panhandler who they say isn't stranded.

The man has asked passersby for money, saying his car has broken down, but authorities said it's all a scam to get money.

"He'll pull off on the side of the road, or he'll go in a shopping center, and he'll stand by his car and raise the hood up," said Chief John Viola, with Haverford Township police.

Viola said 60-year-old Andrew Dougherty, an Upper Darby resident, has been scamming people for at least a month.

Viola said he would stand by his blue Toyota Highlander asking for cash, saying he was down on hard times and needed the money for his disabled vehicle. Police said Dougherty would ask for about $20.

Action News spoke with a woman who said she was a victim of Dougherty's, encountering him in two different shopping centers in Haverford Township.

"He came to me and said his car was broken, that if he had the tow service come that they wouldn't accept credit card, only cash," the woman said.

Police say it's important for victims to alert them if they are approached.

"We get a lot of calls two hours later, or the next day, when the incident has passed. We should know about it right away, and we can go check the area and see if he's still there," said Viola.

The woman said Dougherty asked her for $16. She said she didn't have any cash on her, but at first thought he needed help. She said she even asked other people in the parking lot to give him money.

She said the alarm finally went off that this man was scamming people when she saw him in another shopping center pretending his car was broken down. That's when she said she called the police.

"People work hard for their money, and they shouldn't be ripped off like this. It was a full-blown scam in my opinion," the woman said.

Police say anyone who sees Dougherty should contact them immediately. They currently have a warrant out for his arrest.