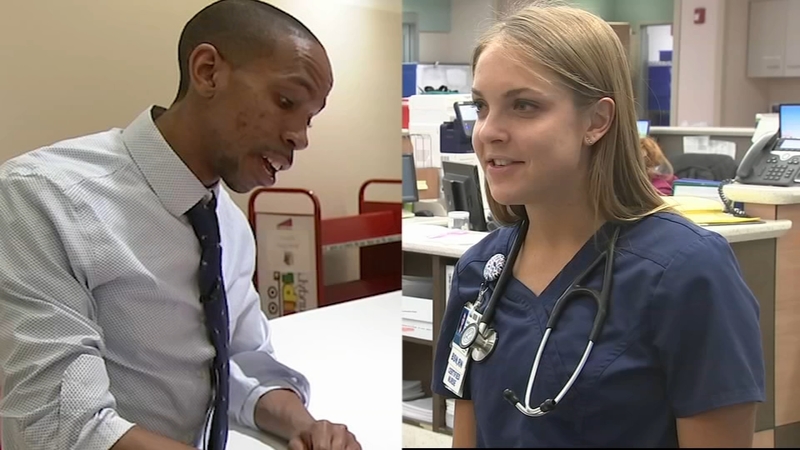 PHILADELPHIA (WPVI) -- The Olympic Marathon Trials are coming up on February 29th in Atlanta.

There are a number of local runners competing and many have more in common than running - they're also healthcare professionals.

Duriel Hardy, 31, is a pediatric neurologist at Children's Hospital and Kayla Lampe, 28, is an emergency room nurse at Bryn Mawr Hospital.

Both will be running in the Olympic marathon trials, trying to win a spot to compete in Tokyo this summer.

"I love the sport, I love to run, it's also a really good stress relief for me," said Hardy.

Hardy is a life-long runner but mostly short distances. Adding miles didn't seem to slow down his time running his first marathon ever at 2:18:21.

And with that, he qualified for the Olympic Trials.

Lampe ran in high school and college, also shorter distances than the 26.2 mile marathon. But her coach had some encouraging words even back then.

"If you go and try to do a marathon one day, you are going to qualify for the Olympic trials. Didn't believe him at the time, but here I am," she said.

She fits her training in between 12 hours shifts.

Hardy wakes up at 4 a.m. getting his miles in before - and sometimes after - work.

They're joined by several other medical professionals in Philadelphia, also elite marathon runners.

Hardy says it takes a certain personality to run long distance, just as does to pursue a career in medicine.

"I think those personalities are similar in that it is a very long road for both marathon training and with the medical profession, and so it requires a lot of dedication and perseverance and commitment," he said.

Philadelphia's running community is holding a big sendoff for the Olympic marathon qualifiers Monday night at Yards Brewing Company, which is located at 5th and Spring Garden in Center City.

The event starts at 6 p.m. and tickets are $10, with the proceeds to be split among the athletes.