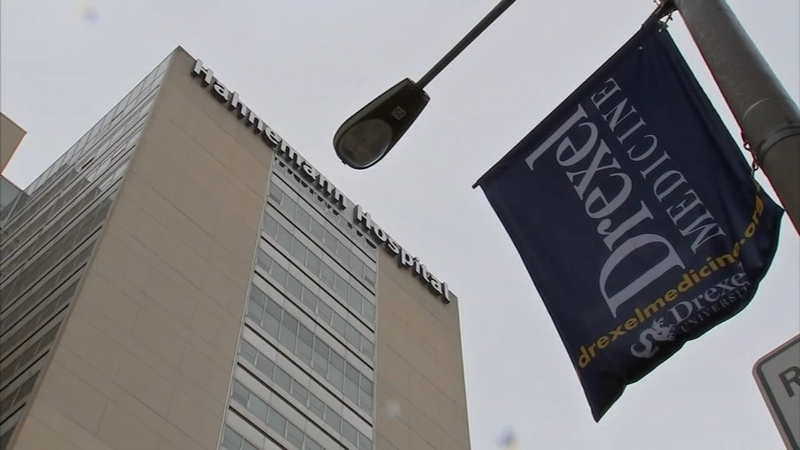 PHILADELPHIA (WPVI) -- Drexel University is eliminating approximately 40% of its physicians and clinical staff due to the impending closure of Hahnemann University Hospital, Drexel President John Fry said in an email to the community Thursday.

Emotions are running high as the hospital continues plans to close. The main concern is patients.

Jasleen Kahlon, a 2nd-year resident says, "I think that's what's affecting us the most right now seeing all the empty hospital beds, meeting with patients and trying to decide where to go forward with this."

"Over the past year, the senior leadership at the College of Medicine and the University has worked relentlessly to avoid Hahnemann University Hospital's closure, while at the same time ensuring that the College has a strong future," the letter begins.

Fry says while the long-term goal is to preserve as many clinical faculty and staff jobs as possible, "Drexel is forced to eliminate certain health-care service lines and discontinue the positions of affected physicians and clinical staff."

"Due to the irreversible damage that Hahnemann's closure will cause to our physician practice plan, the merger is now more crucial than ever," the letter reads.

According to the letter, Tower Health would be able to offer employment to 60% of the affected physicians and clinical staff within the DUP, either at their current Drexel Medicine practices or at Tower locations in Reading, Chestnut Hill, and the Philadelphia suburbs.

Doctor Rene Rubin is a hematologist/ oncologist. Her private practice, Rittenhouse hematology-oncology will stay open but she needs to find another hospital to admit sick patients.

She tells us finding 60 percent employment sounds like wishful thinking.

"Because they are not empty hospitals. Reading is a 700 bed, fully staffed hospital, Brandywine is fully staffed, Chestnut Hill is staffed," Dr. Rubin said.

As for patient-care, she expects it to be disruptive and many will be forced to find new doctors.

"It's devastating," she said, adding "the reality is people who live in this area do not have cars and can't get to Chestnut Hill."

And finding a new doctor can be difficult - especially with some specialities there can be a waiting list to get in.

One silver lining is many staff say the other hospitals in the area have been extremely helpful during this time.

Fry says the reorganization will not impact basic science faculty or professional staff within the College of Medicine.

Last week, Hahnemann University Hospital announced plans to transfer a majority of the residency and fellowship programs to Tower Health.

For the Drexel Medicine patients whose care will be impacted, Fry says they will be contacted by their provider.

"As we work through this extremely difficult transition, we want to stress that we are fully committed to continuing our educational, research and clinical missions as we emerge stronger as a College of Medicine - and as a University," Fry says.

Earlier this week, Philadelphia Academic Health System, the parent company of Hahnemann University Hospital, announced a closure plan timeline that would conclude with the hospital closing its doors for good on September 6.