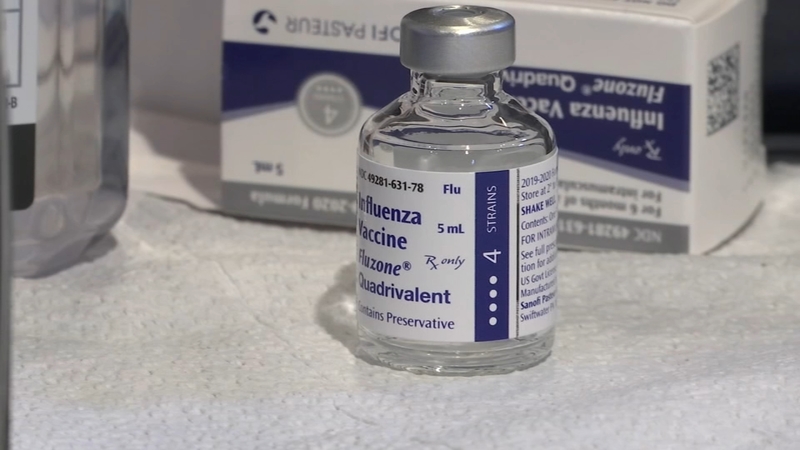 WOODLAND TOWNSHIP, New Jersey (WPVI) -- Last year, less than half of American adults got a flu vaccine, according to the CDC.

Now, health officials and doctors are hoping more people will protect themselves against the potentially deadly virus.

One by one, sleeves were rolled up at a free flu shot clinic in Woodland Township, New Jersey on Thursday. Even the township's mayor got one.

"I think it's very important that everyone gets their flu shot. If not here, somewhere else," said Mayor William Degroff.

Action News stopped by one of the free flu shot clinics being offered in various locations throughout Burlington County in the coming weeks.

On Wednesday morning in Washington D.C., several high-profile health officials got their flu shot in front of a packed room during a press conference held by the National Foundation for Infection Disease and the Centers for Disease Control and Prevention. They encouraged others to do the same - especially kids.

At Virtua Our Lady of Lourdes Hospital in Camden, New Jersey, right on cue, flu cases are already showing up at the emergency room.
Doctors say they've seen three or four cases already this month.

"It starts as a trickle and then it just spikes," says Dr. Alfred Sacchetti, chief of emergency medicine.

Sacchetti says it's hard to predict what the coming months will bring in terms of flu, but he says year after year he has to dispel myths about getting the shot.

"One of the things people talk about, they say, 'I always get the flu when I get the vaccine.' You can't. The vaccine is a killed virus. You cannot get the flu from the vaccine," said Sacchetti.

Dr. Sacchetti also says the best time to get the shot is at the beginning of the season as soon as it's available. He also says the flu shot can lessen the severity of the flu if you do come down with it.