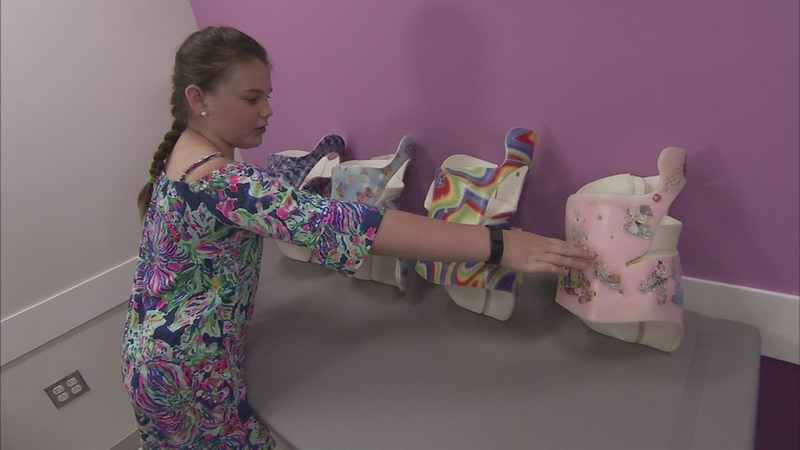 PHILADELPHIA (WPVI) -- All of us have a little curvature in our spines, but when the curve becomes too severe, that's scoliosis.

When it happens in children, it can cause physical and emotional challenges.

Annie Dever was just 6-years-old when an aunt noticed her back didn't look quite straight.

After getting checked by doctors, the Devers got the news.

"Ok, you need tobe braced - and that was it," said mom, Maureen.

Scoliosis can have a variety of causes and tends to be genetic, but about 80 percent of the time there's no known trigger. It usually appears between 8 and 10 years of age. It happens as often in boys as girls.

But..."Girls' curves are much mroe likely to get bigger," says Dr. Flynn.

Severe ones like Annie's might normally have meant surgery, but since she was so young, that would have been complicated.

"You're looking at half a dozen operations at least in her childhood and adolescence," said Dr. Flynn.

So, Dr. Flynn recommended a back brace first.

Braces usually go from shoulder to hip, and should be worn 16 or more hours a day - including during sleep. But getting comfortable can be tough.

"You go on your side with your hands so they don't get caught under your brace, because that hurts," said Annie.

Some girls are self-conscious their braces show through clothing, and some face criticism - even bullying. But Annie says everyone in her school has been understanding.

And her dedication to wearing the brace has worked.

"Four years later, her curve's about half the size it was," says Dr. Flynn.

The brace is off for sports - including Annie's new-found love of golf.

And through her experience, she met another scoliosis veteran - pro golf champion Stacy Lewis.