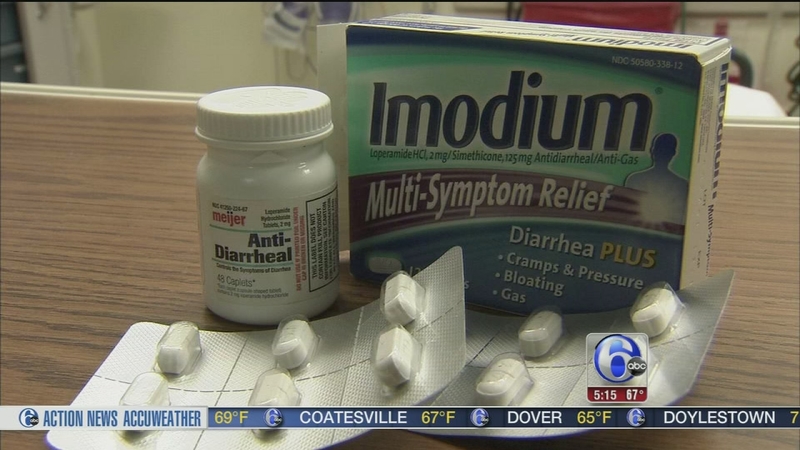 ALLENTOWN, Pa. (WPVI) -- A local doctor is sounding the alarm on a routine medication, which is becoming a dangerous target of abuse.

It's something almost everyone has in their medicine cabinet.

The most common brand name is Imodium, but it's also called loperamide.

But reports of abuse started surfacing last year, by people addicted to opioids.

Now, doctors in our area are seeing a spike in the problem.

Dr. Katz, an emergency room doctor and toxicologist at Lehigh Valley Hospital, is shocked by the amounts of loperamide people are taking, either trying to get high, or to ease withdrawal.

He treated two nonfatal overdoses in the emergency room in the past few months.

And the Lehigh County coroner says a 32-year-old Allentown man died of it last August.

But Dr. Katz suspects the abuse is more widespread.

He says it takes a lot of loperamide to produce euphoria.

By that time, it also builds up to dangerous levels in the heart.

"It affects the electrical system of the heart, and it can cause a life-threatening arrhythmia," says Dr. Katz.

Last summer, the FDA issued an alert about the heart problems, and the potential for abuse.

Read the warning, including details on the side effects of overuse, HERE.

But Dr. Katz thinks it's time for warning labels on the packages, or to put it behind the counter, like Sudafed.

As long as the opioid epidemic is around, Dr. Katz believes there'll be abuse.

"I see this as being a recurrent problem," he says.

Dr. Katz says it can take days for loperamide to leave heart muscle, and it can cause permanent damage.

Johnson & Johnson, the maker of Imodium, says when taken as directed, it's safe to use.
------