New procedure promises to freeze your fat away 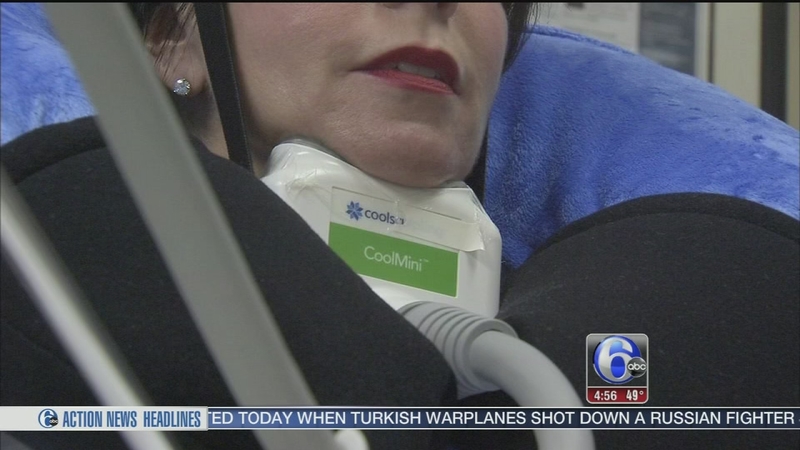 CHERRY HILL, N.J. (WPVI) -- Double chins bother some people so much they hide them under turtlenecks and scarves.

Earlier this year, a new injectable fat-dissolver emerged on the market, but now there's a new one-and-done way to make trouble spots like that go away.

Debbie Gruber from Cherry Hill, New Jersey has always kept herself lean and healthy, but just past her 50th birthday, she noticed something.

"I'm becoming self-conscious of my neck and chin area and it's hanging a little bit," she said.

"It's painful, you get risks from anesthesia," said Debbie.

Instead, she decided to freeze that double-chin away with CoolSculpting.

She says it worked for a bulge on her upper back.

CoolSculpting has been used for several years for the middle, thighs, and other larger areas.

Recently, the FDA Ok'd a new applicator for smaller areas.

"We can jump around the body, and use it to get rid of fat in specific zones," said Dr. Steve Davis.

Dr. Davis says vacuum power pulls the target area into the CoolSculpt handpiece, for an hour of icy cold.

"Once those fat cells are frozen, they will literally die, and the body will just excrete them normally," he said.

Those fat cells will be gone permanently. However, Dr. Davis says it's not carte blanche to abandon healthy living.

"That doesn't mean you couldn't gain fat in other areas," said Dr. Davis.

Debbie says there's an initial shock from the cold, and keeping your head and shoulders immobile for an hour is a challenge. But it's tolerable.

When it was done, Debbie's chin was massaged to break up the frozen fat.

Dr. Davis says the new applicator is also good for fat on the inner knees and around the arm pits.