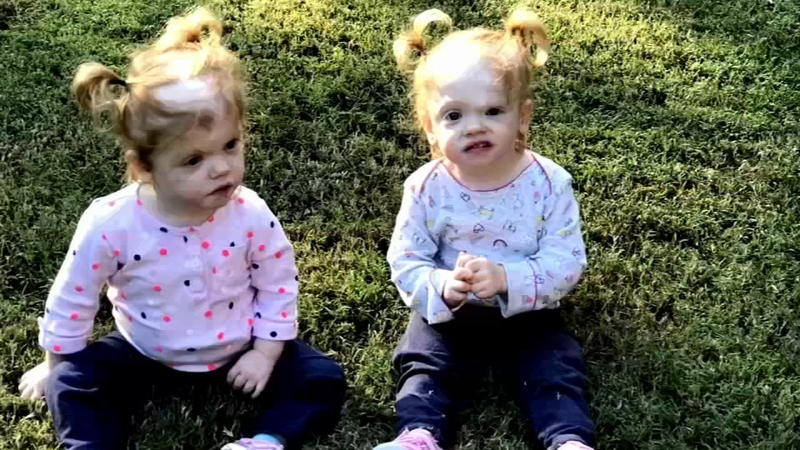 UNIVERSITY CITY (WPVI) -- It's been more than a year since the conjoined Delaney twins were separated at Children's Hospital of Philadelphia.

For 2 and 1/2 year-old Erin and Abby Delaney, life is about playing and fun. They don't comprehend the hours of therapy they do every day, but it is paying off.

Abby and Erin entered the world sharing a skull. At just 10 months of age, they were separated during 11 hours of surgery at Children's Hospital.

However, that was just the start of what's still a long, difficult road. They spent 485 days in the hospital before going home to North Carolina and every day includes hours working on basic skills younger children have already mastered.

"The girls are getting physical therapy, occupational therapy, speech therapy, feeding therapy, play therapy, and music therapy," said mom, Heather Delaney, with a laugh. "We have a ton of therapy."

Heather says they're learning something new every week. Abby can finally sit by herself and though neither girl walks, Erin is crawling - everywhere.

"She is a little crazy person. She crawls faster than any child I've ever seen crawl. She is also starting to pull herself up on things," said Heather.

The twins will need more surgery - the first, in the next year or two, to close the holes in the top of their heads.

"It's very safe for them to live with no bone on the top of their head now, but as they get older, participating in sports, etc., it'd be good for them to have completed skulls," said Dr. Jesse Taylor, plastic surgeon at CHOP.

They'll also need plastic surgery for their faces and scalps. Their mom says it's been an ordeal, but she's grateful.

"They changed their lives, so that they can be whoever they want to be, instead of just being 'the conjoined twins'," said Heather.

This was one of the earliest separations for twins joined at the head, but the doctors say younger babies heal faster and they believe Abby and Erin will have better brain recovery and physical progress. Their mom says that they are her miracle babies.