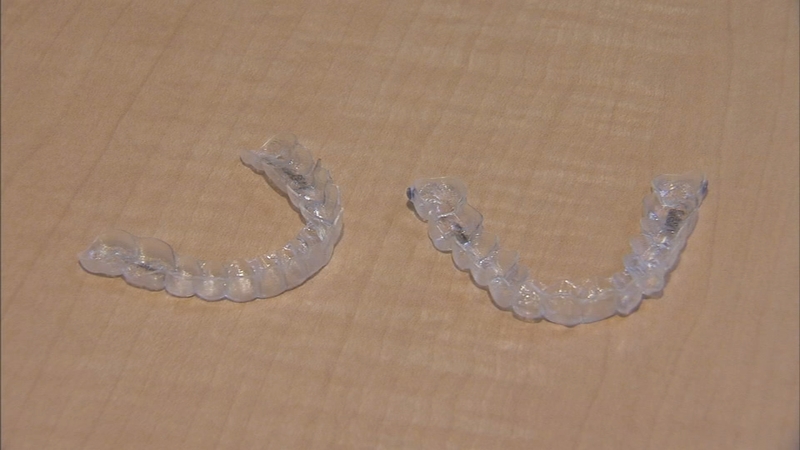 PHILADELPHIA (WPVI) -- Clear braces are very popular among adults who need teeth straightened, but they're becoming a big hit among pre-teens and teens and some doctors think they may have advantages over conventional braces.

When 10-year-old Andrew Ra needed correction for a serious underbite, his mom, Talena, thought he'd get the metal braces she had as a teen.

"I knew of Invisalign, but thought it was more for adults," said Talena.

Dr. Segal says braces on kids as young as 8 can keep bad problems from becoming worse.

"If we can get them when they're growing, earlier on, there's a better chance we can avoid surgery," he said. "With this underbite, you were causing a lot of pressure on those lower front teeth, and that can cause trauma."

Dr. Segal sees several pluses for Invisalign with some pre-teens.

"With braces, we typically want to see them every 6 to 8 weeks," he said.

But with Invisalign, it's every 2 to 4 months.

Another plus is keeping teeth clean.

"You can take your aligners out and brush teeth normally. You don't have the braces getting in the way," said Dr. Sega.

And there are compliance indicators. They are blue buttons that wear down and tell orthodontists and parents that kids are wearing them like they're supposed to.

Talena says Andrew has been great at wearing his aligners and keeping his teeth clean and she saw faster results.

We started to see a difference within even a few weeks," she said.

Doctor Segal says Invisalign costs roughly the same as braces. Among teens, Invisalign use is up 50% in the past year.