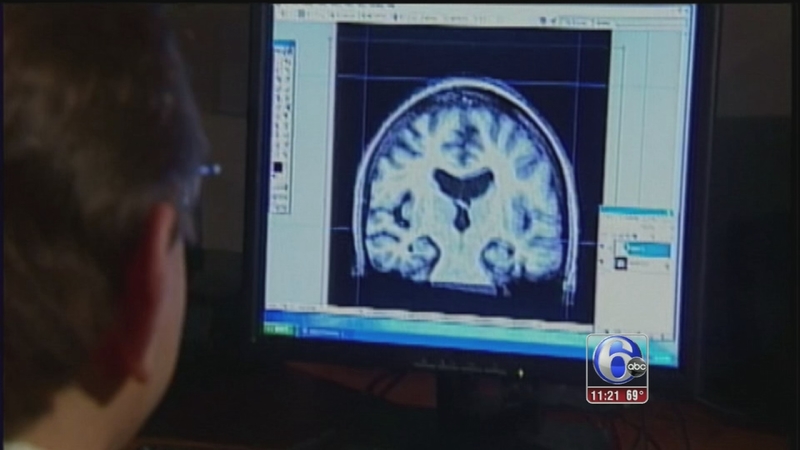 UNIVERSITY CITY (WPVI) -- University of Pennsylvania researchers have made some exciting strides in the fight against Alzheimer's and they hope the discoveries will lead to a delay in the onset of the disease.

Almost half the people who live to be 85 years old will develop Alzheimer's disease.

It's a debilitating condition that costs a staggering $600 billion a year worldwide.

Philadelphia scientists are among those working harder than ever to stop it.

"This is a dream of all scientists that work on diseases," said Dr. Virginia Lee, Director of Center for Neurodegenerative Disease Research.

Each day, scientists test brains damaged by Alzheimer's and look for key issues in the labs at the University of Pennsylvania.

Dr. Lee and Dr. John Trojanowski have lead the way as part of a consortium of experts.

Now after years of analysis, and trial and error, they've had a breakthrough.

They discovered that Tau proteins get misfolded and cause tangled information to spread from cell to cell. Knowing that means it may be possible to stop the cell to cell spread.

"We target Tau, we target Sia Nuclein, we figure out a way to unfold it with a small molecule, drugs or a way to snag it with antibodies and throw it in the trashcan," said Dr. Trojanowski, Director of Penn Institute on Aging.

If they succeed with their theories on mice, it may one day lead to a human application.

That's exciting to this team because even if they just block the cell to cell spread for five years,that would effectively be a cure for Alzheimer's.

Patients like Don Nye, a retired scientist who now has Alzheimer's, would love to see that happen.

"It's a very, very sad kind of life when you have it," said Nye.

"Some kind of a breakthrough would be wonderful because watching him suffer is real hard," said Corrine Sylvia, wife and caregiver of Alzheimer's patient.

The Penn researchers hope to get more funding to continue this exciting research on dementia and cognitive impairment.