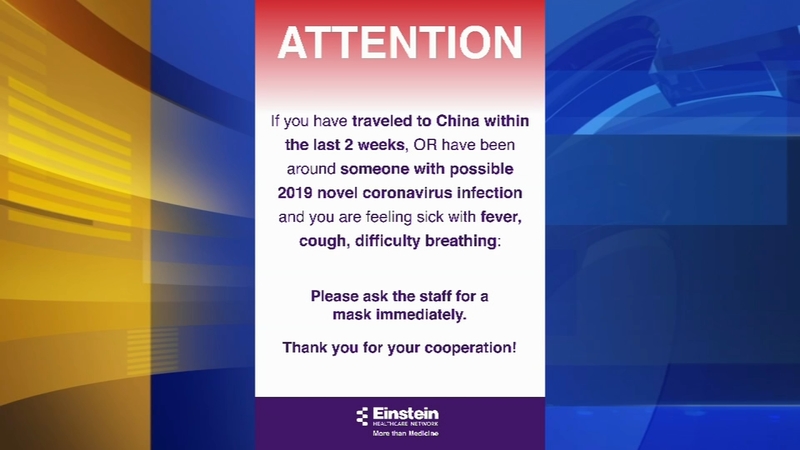 PHILADELPHIA (WPVI) -- Officials have ruled out COVID-19 for at least one of two University of Delaware students being tested. Results for the other are still pending.

Philadelphia health officials have also ruled out a potential case they were watching.

But overseas, it's a different story. In China, the virus is spreading and health officials there are stepping up efforts to contain it.

Back here in the United States, there are 15 confirmed cases, most are directly related to travel.

The risk for infection to the general public here remains low, but health officials are staying on alert.

Printed signs in several languages are now posted at many local medical centers including Einstein, asking visitors if they've traveled to China recently or been in contact with anyone possibly infected with novel coronavirus, which is now called COVID-19.

"As a healthcare setting, we are taking this very seriously," said infectious disease doctor Eric Sachinwalla.

Dr. Sachinwalla says they remain vigilant, but reminds the public that the risk here in the US for COVID-19 remains very low.

You have a much greater chance of being exposed to other respiratory viruses, including the flu.

"So doing everything you can to protect yourself against the flu is the most important thing," said Dr. Sachinwalla.

That includes a flu shot, good hand washing, staying away from others who are sick.

"Not only will that protect you from flu, but if there were cases of coronavirus, that would also be the steps to prevent getting infected from that," said Dr. Sachinwalla.

It's a different story overseas. China saw a spike in cases, bringing the total to now more than 46,000, but that could be an over-estimate.

They're no longer waiting for lab test results, instead diagnosing based on symptoms and images.

Aboard the Diamond Princess, more passengers, 218 now, have tested positive - that includes Clyde and Renee Smith from Atlanta, Georgia, who were seen in a photo smiling inside their hospital room in Tokyo.

"I was nervous before I knew they were positive," said their son, David.

David says thankfully his parents don't have symptoms and are doing well.

"Really not much we can do, just waiting and hoping they get home soon," he said.

He says his parents were on-board the cruise ship to renew their wedding vows and their adult grandchildren were also on the cruise.