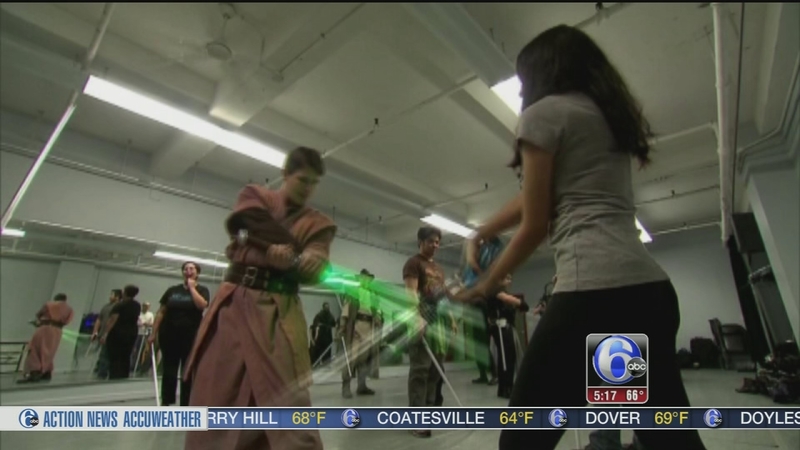 And now, with the arrival of a new Star Wars installment, you can work out like s Jedi knight!

According to Daniel Reiser, the instructor at New York Jedi, the secret is to know how to handle your weapon.

Every Thursday at the Lightsaber Fitness class in Manhattan, Star Wars fans get to sweat it out, in character, practicing moves just like the lightsaber battles from the movies.

Though it might not go to that level yet.

Reiser, a special education teacher, has been doing this class for 8 years.

"Where's the fun of just simply watching something?" he says. "I mean you look at say a football fan. A lot of them are never gonna be an NFL player, but they're gonna go in the backyard and throw that football around. It's the same thing but instead of footballs we have lightsabers."

"It's a way of becoming part of something that we truly love," Reiser adds.

By day, the current Jedis-in-training range from a legal assistant to a kitchen designer.

By night, they are united by one thing.

"Its a visceral gut feeling, it just feels satisfying to pick up one of these and all of a sudden you are a Jedi knight, you are a Sith Lord," says Russ Briggeman.

Star Wars has inspired a fan enthusiasm that goes beyond a love of watching the movies.

Fans want to experience it to really understand it.

The New York City group has a core philosophy - "Once a Jedi, always a Jedi," says Reiser.

And together, they say, "Jedi! May the force be with you!"

Star Wars is owned and distributed by Disney, the parent company of 6abc.