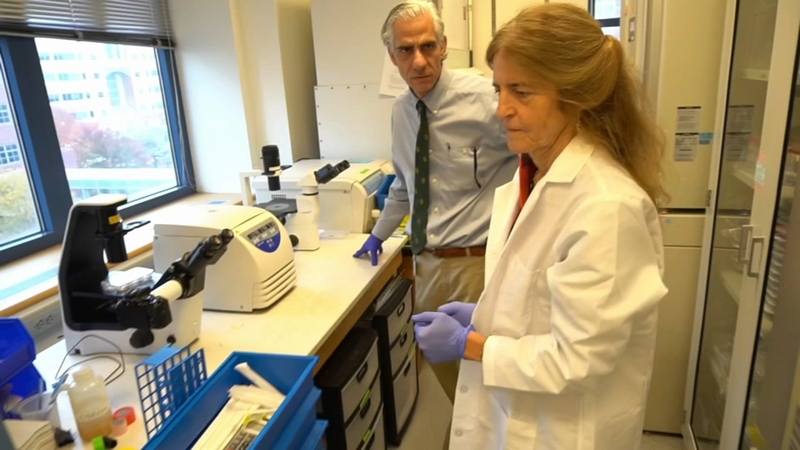 WEST PHILADELPHIA (WPVI) -- A team of local researchers are sharing in a One-million dollar prize for their work on reversing an inherited form of blindness.

This is a breakthrough therapy that basically works by changing a gene mutation. It won approval from the FDA last December and is already making a difference.

It's been a long road for 29-year-old George Marriott. When he was just 6-months-old, doctors thought he was completely blind.

"I would sit and stare at light bulbs which is a sign of blindness or low vision," he said.

Later, they realized George had some vision, but suspected he had Leber Congenital Amaurosis, an inherited disorder of the retina where the eye forms images.

"That's the area that's affected. The nerve cells aren't functioning because they lack an enzyme to metabolize vitamin A," said Dr. Albert Maguire from Penn Medicine.

There was no cure, so George's sight got even worse.

"By 4th grade, I couldn't read a chalkboard. I was struggling to read a dry erase board," said George.

Over the years, he had to find new ways to see and study. Then, he heard about research by Doctors Jean Bennett and Albert Maguire at Penn and Children's Hospital of Philadelphia. They thought they could correct the genetic mutation.

"If you fix that gene, all the other genes are functioning properly," said Dr. Maguire.

They attached the corrected gene to a disabled virus and injected it under the retina of blind dogs with the canine equivalent of the condition.

"Lo and behold, these blind puppies that couldn't move around and find their water bowl, after a one-time injection began playing and running around," said Dr. Bennett.

In they lab they proved, the drug - Luxturna - had helped restore vision. It won FDA approval last December.

George became one of the first to receive it and could tell it was working.

"I can already see a massive change in my vision from literally 2 weeks ago," he said.

For the first time, he can clearly see his wife Sara's eyes and he's eager to see what many of us take for granted.

"See the leaves change color in a tree. See birds flying in the sky," he siad.

The doctors also noticed Luxturna was able to bring the optic nerve back to life - something they didn't think was possible in adults.

George now has central vision and some peripheral vision. About 40 percent of people in the trial are no longer legally blind.