'Here we are again': State braces for 2nd winter storm within 1 week 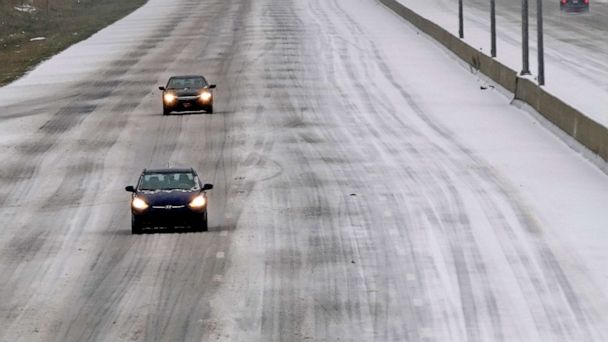 Another storm is barreling through the South Friday, bringing freezing rain, sleet and snow to some areas already hit hard by winter weather.

The storm stretches from Texas to Virginia. A winter weather advisory has even been issued for Pensacola, Florida, where freezing rain could leave a layer of ice behind.


Heavy ice and snow are expected for the Carolinas and Virginia.

In North Carolina, where residents were just hit by a winter storm last weekend, Gov. Roy Cooper has issued another state of emergency.

"Here we are again, as North Carolina prepares for our second winter storm in a week," Cooper tweeted Thursday. "We're looking at another round of snow, sleet, freezing rain and ice -- bringing more treacherous roads and power outages."

"This time, it's people in eastern North Carolina that will likely feel more of the storm's brunt, while those in the mountains & foothills will see very little, if any," Cooper said. "We are activating National Guard troops to help our counties with transportation & other needs."


Cooper warned, "We expect significant power outages from this storm in our southeastern counties, including the cities of Wilmington, Jacksonville and New Bern. That's where a quarter inch or more of ice is expected on trees and power lines, and that's a recipe for power outages."

Up to half an inch of ice is expected in the coastal Carolinas, while eastern North Carolina to coastal Virginia could get 4 to 6 inches of snow.

Roads are already being impacted Friday morning. In Raleigh, an ambulance carrying a patient in cardiac arrest slid off the road and down an embankment, ABC Raleigh station WTVD reported. The patient died in the crash and two others were hurt, according to WTVD.