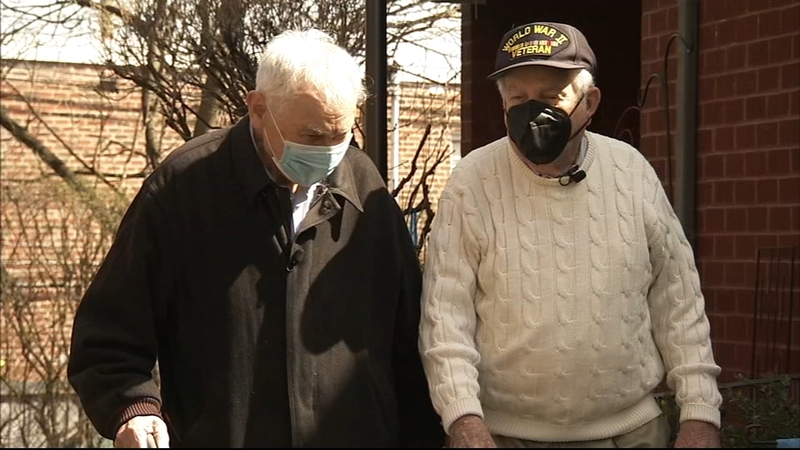 NORTHEAST PHILADELPHIA (WPVI) -- It took Holocaust survivor Ernie Gross over 60 years to find Don Greenbaum, one of the U.S. soldiers who liberated the Dachau concentration camp on April 29, 1945.

"We never heard the expression concentration camp," explained Greenbaum. He says his battalion was shocked when they came to Dachau and saw many people behind barbed wire.

"What was going on here? You know, we couldn't imagine," he said.

Gross was just 15 years old when he and his family were taken from Romania and sent to Auschwitz in 1944.

"My number was 71,366," said Gross. He lost his parents and three siblings before he was freed. "When I was in the camp, I made a promise - I want to be here tomorrow."

Greenbaum was just 18 years old when he entered the U.S. Army in 1943. He says he quickly realized basic training was over and he was headed into real combat when they hit Utah Beach.

Gross and Greenbaum didn't meet on the day of liberation, but it's a day neither will forget.

"I see the soldiers throwing down the weapons," explained Gross. "At the gate, there is a jeep. It's full of American soldiers."

"Just the idea that I helped him come home, that is very rewarding," said Greenbaum.

About 10 years ago, they finally connected and became friends after Gross read about Greenbaum's efforts in the Jewish Exponent.

"He tells me about his life. I tell him about my life," said Gross.

"We have a great time together," said Greenbaum. "I can't imagine what he survived through and he can still tell his jokes."

Greenbaum says they have formed a tight bond over the years, describing Gross as being like his kid brother.

"And it's been a real journey for both of us," he said.

They now talk to students and organizations across the U.S. about their experiences so the Holocaust is never forgotten.