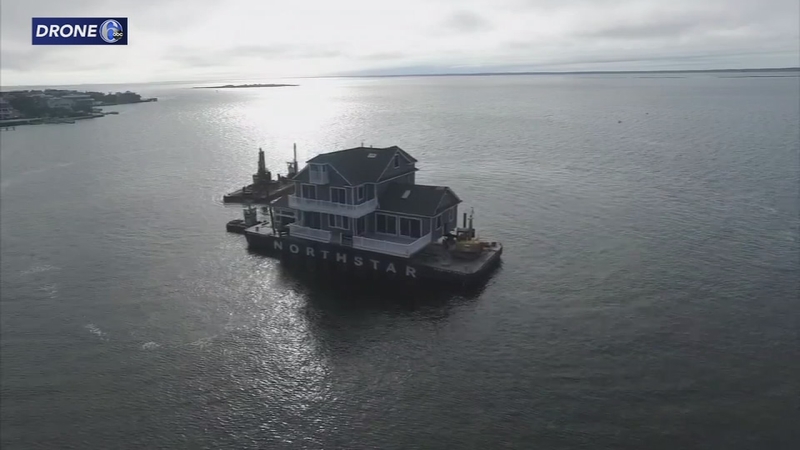 LONG BEACH ISLAND, N.J. (WPVI) -- It's not the kind of thing you normally see floating down the Barnegat Bay off Long Beach Island. But a three-story house that weighs upward of 60 tons could be seen chugging its way south from Surf City to Brant Beach.

Ed Ullrich of Yardley Pa. said, "We just fell in love with it. Then the whole idea of it being put on a barge and coming down the Bay just kind of blew us away."

Ed and Justine Ullrich followed their new house in a boat. They bought it from builder-developer Patrick Moeller, who needed to get it out of the way for new construction, but didn't want to demolish it.

Moeller said, "A lot of the houses the land is so valuable, but the houses are actually nice. They really shouldn't be torn down."

Former owner John McLaughlin added, "Saves me a little bit of money on demoing and it's exciting. It's exciting to see everything slide over."

Construction crews jacked the four-bedroom house up and slid it onto the barge before taking off on the three-mile journey to its new home.

"Pushing a house under a bridge is something new I think for LBI, so that would be something I want to see happen, and then I'll feel relaxed," Justine said.

The house floated right under the Route 72 bridge without a hitch. And now this perfectly fine home, which used to house the Carrel Creek gun club where baseball legend Babe Ruth would go duck hunting, will be recycled instead of knocked down.

"I think I'm really excited about that idea from everything from the idea that we can sustain something, but also sustain the history," Justine said.