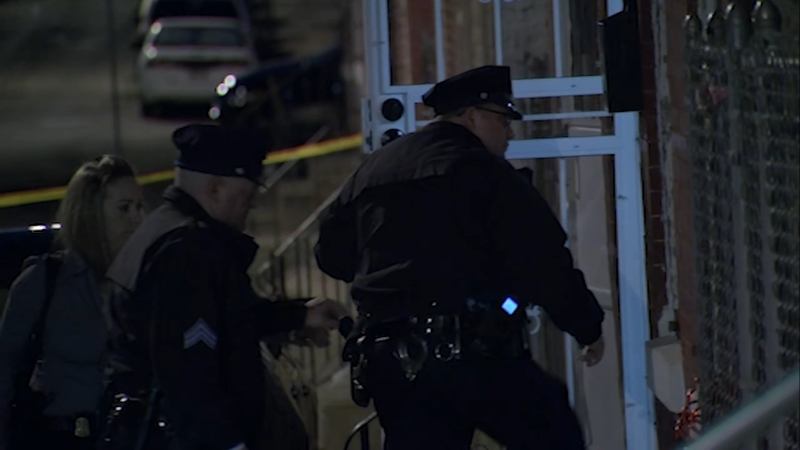 PHILADELPHIA (WPVI) -- It's been a violent weekend in Philadelphia. Seven people have been killed in the city over the past weekend, bringing the total number of homicides in the city to 13 for 2020, not even a full month into the New Year.

Police responded to calls for shots fired to find two men shot, one lying dead in the street. The second victim was taken to Temple University Hospital in critical condition.

Around 1 a.m. Sunday on the 4700 block of North 5th Street, police said officers found a man lying in the middle of the street with two gunshot wounds to the head. He was taken to Temple University Hospital where he later died. Police have not yet released the identity of the victim.

Just about an hour earlier, a man in his 20s was shot at the intersection of Amber and Rush streets in the city's Port Richmond section. He was taken to the hospital where he was later pronounced dead.

Police said they found at least four shell casings at the scene. So far, no arrests have been made in the case.

Around 1:16 p.m. Sunday, police say shots rang out near the campus of Saint Joseph's University.

Officers found a 24-year-old man suffering from multiple gunshot wounds near the 2400 block of N. 54th Street. He was pronounced dead at the scene.

According to a campus security alert, the suspect fled in a dark blue sedan in the southbound direction. The shooting does not involve the St. Joe's community, officials said.

In the city's Germantown section, a shooting left an 18-month-old baby and an adult male injured by gunfire around 5:30 p.m. on the 100 block of East Pastorius Street. Police say the baby suffered a graze wound to the head and the man was shot in the upper body. Both victims are expected to survive.

On Saturday afternoon, a 15-year-old boy was shot to death in North Philadelphia.

According to investigators, the boy was shot twice in the chest around 1:30 p.m. He was taken to Temple University Hospital where he later died.

Around 6 p.m. on Saturday, a man was stabbed to death during a fight on a busy Center City street.

The injured man was taken to Thomas Jefferson University Hospital where he later died. A man was arrested and a weapon was recovered, according to investigators.

An hour later, a 24-year-old man was shot once in the head in the 200 block of South Edgewood Street, according to police.

He was taken to Penn Presbyterian Hospital where he died a short time later. Police said they have arrested a man who they say knew the victim.

Mayor Jim Kenney released this statement on the violent weekend:

"This weekend's violence was nothing short of horrific. My condolences go out to the loved ones of the victims whose lives were tragically lost. My prayers are also with the toddler who was grazed by a bullet earlier today. The Police are undergoing thorough investigations and our Community Crisis Intervention Program workers are out in the impacted communities, but we need help from everyone to solve these crimes and keep our neighbors safe. If you have information, please submit a tip by calling the anonymous tip line at 215-686-TIPS (8477). As I've said before, this senseless violence leaves deep scars on our communities. Reducing it is our Administration's top priority. We're investing in proven, data-informed strategies to significantly reduce homicides and shootings. This means expanding our Community Crisis Intervention Program which helps deescalate tensions before they result in shootings; focusing on repeat offenders with Group Violence Intervention; supporting grassroots community groups; and more. There is no single answer to solve violence, but we're confident that our comprehensive efforts will make a difference."