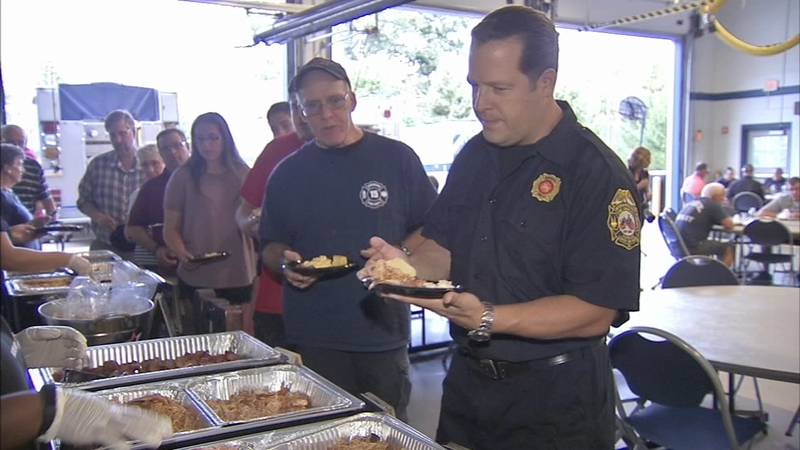 HORSHAM, Pa. (WPVI) -- It was a packed house Wednesday night at the Horsham Fire Company for an extraordinary event.

Approximately 80 firefighters and police officers, along with around 30 residents of the Carriage House Manor, were being treated to a hearty barbecue including jalapeno and cheddar sausage with all the trimmings.

It was being billed as a big thank you to all the firefighters and police who responded to a massive three-alarm back on July 13 at the 55 and older retirement community.

More than 100 firefighters were involved from across the area. Four homes were lost. Resident 73-year-old John Montero lost his life, a Vietnam War veteran who suffered a back injury and couldn't make it off his second-floor deck.

Resident Joe Rothstein said he saw two police officers trying to get Montero to jump, but he said he couldn't.

Resident Janet Herre said, "And I saw the bravery of the police officers who tried to save him; it touched my heart."

Kathy Lamb was among those who lost her home. She told Action News she finally found another place to live.

While Lamb lost her home, she's more upset about losing her friend John.

"And I had to watch him on that deck and I couldn't do anything for him so I can't worry about a house, I can't, It's people, people are the most important thing," she said.

The event was being catered and hosted by Mission BBQ from its facility next door in Warminster.

Chris Blythe of Mission BBQ said, "Our company has always given back. Our mission is to serve and these are the kind of events that we do. We take care of our American heroes and this happens to be something addition to the community so it's kind of exciting."

The first responders on hand for the event could not be more grateful.

Horsham Fire Company Chief Lee Greenberg said, "It's unprecedented, it's unbelievable, it's very warming, it shows what kind of town we live here in Horsham."

And needless to say, residents were also moved by the generosity.