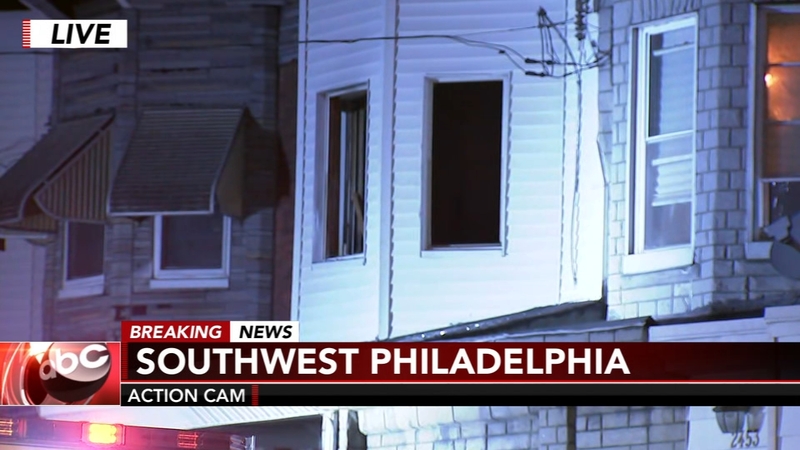 The fire broke out in a row home on South 61st Street near Elmwood Avenue.

Maurisa Seamon lives next door to the row home where the fire started around 3 a.m.

"We called 911," Seamon said. "I heard the beeping, which was the fire alarm, and then when I walked in the room I smelled the smell. It smelled like rubber was burning."

Seamon woke up her mother and went outside. She spotted fierce flames at her neighbor's home.

"Oh, it was intense. It was intense," Seamon described. "As we came out, outside right there in the living room we seen fire- flames. It was just crazy."

Arriving firefighters were met with heavy fire from the basement and first floor.

Authorities say the victim suffered smoke inhalation and burns over 80 percent of her body.

Fire crews placed the fire under control within 25 minutes.

The cause of the fire is under investigation.
Report a correction or typo
Related topics:
southwest philadelphiawoman injuredfirehouse fire
Copyright © 2021 WPVI-TV. All Rights Reserved.
TOP STORIES
New details revealed in crash that killed 4 family members
Man dies after shooting in parking lot of gentlemen's club
"Hands are tied" dealing with teens at NJ shore, police captain says
Governors in NJ, Pa. call on Cuomo to resign: 'We are appalled'
Not all of MLK Drive reopening to traffic; closures remain for years
450,000 bees found inside walls of Montco home
School board: Teachers, staff must be vaccinated or get tested weekly
Show More
Passenger tied down with duct tape on Philly-Miami flight
AccuWeather: Some sun inland today, showers at the shore
2 injured in Conshohocken incident
Obama scales back 60th birthday celebration due to COVID concerns
Viral Video: Orangutan wears sunglasses zoo visitor drops
More TOP STORIES News