House to vote to condemn anti-Semitism in indirect rebuke 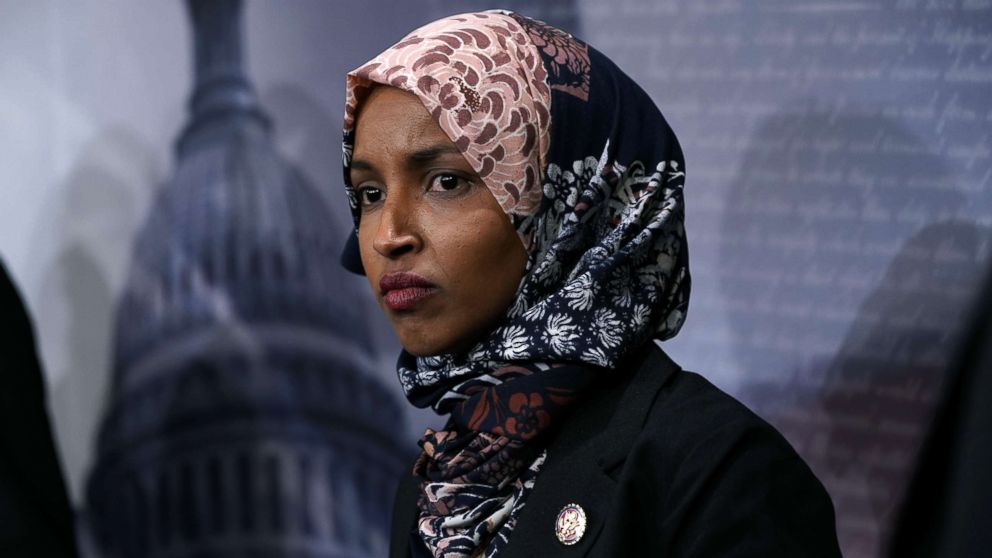 Congressional Democrats are crafting a resolution condemning anti-Semitism, in an indirect but public rebuke of one of their own, Rep. Ilhan Omar, after the latest in a series of remarks she's made aboutIsrael and its American supporters that have generated a blitz of criticism.

Omar, who was elected alongside Rep. Rashida Tlaib as the first women Muslim members of Congress in U.S. history, continues to speak out against Israel, attracting the scorn of Republicans and Democratic colleagues alike -- and competing resolutions from both parties.


A vote on the Democratic version could occur as early as Wednesday, with the apparent approval of party leaders who have grown tired of Omar's rhetoric and signaled they will allow the resolution to receive a vote.

In February, Omar gained notoriety after she asserted that the American Israel Public Affairs Committee, a pro-Israel lobbying group known as AIPAC, was using its influence to pressure Members of Congress to adopt an "allegiance to a foreign country."


Lawmakers, including her party's leader -- House Speaker Nancy Pelosi -- roundly condemned Omar's comments as an anti-Semitic trope, and Republicans subsequently deployed a procedural gambit to force the House, including Omar, to vote Feb. 13 to support an amendment condemning anti-Semitism. That effort passed 424-0, with two Republicans voting present and five lawmakers skipping the vote.


The hullabaloo and media attention led to an increased profile for Omar, who just landed a spot on the cover of Rolling Stone alongside Pelosi celebrating the new Democratic majority's diversity.


But now the congresswoman says she's facing death threats. Perhaps more shocking, the Minnesota Democrat was featured on an Islamophobic poster at the Republican-sponsored WVGOP Day at the West Virginia statehouse tying her to the 9/11 terrorist attacks in 2001.


Unlike before, this time Omar is not apologizing and is pushing back hard, aided by the firepower of other congressional allies like New York Democrat Rep. Alexandria Ocasio-Cortez.


Ocasio-Cortez wasn't alone in condemning the poster. Rep. Nita Lowey, the chair of the House Appropriations Committee, offered her own condemnation of "gross islamophobic stereotypes" - before she added a dig at Omar, tweeting that "Anti-Semitic tropes that accuse Jews of dual loyalty are equally painful and must be roundly condemned."


Then Lowey, a New York Democrat serving in her 16th term, tweeted this shot at Omar:


Omar then continued the public clash, tweeting a long thread that decried any expectation that she should "pledge support to a foreign country in order to serve my country in Congress."


Before she was a member of Congress, Omar warned in a 2012 tweet, now deleted, that "Israel has hypnotized the world, may Allah awaken the people and help them see the evil doings of Israel. #Gaza #Palestine #Israel."


Monday night, another Democratic colleague, Rep. Juan Vargas of California, called on Omar to apologize "for her offensive comments."


Ocasio-Cortez again dove into the fray, launching into another long thread expressing curiosity whether Vargas would "further explain his stance here that it's unacceptable to even *question* US foreign policy."


A draft copy of the four-page Democratic resolution text obtained by ABC News does not name Omar, but summarizes the history of anti-Semitism before rejecting anti-Semitism "as hateful expressions of intolerance that are contradictory to the values that define the people of the United States."


In the meantime, Republicans are enjoying the Democratic distraction, with the president even taking notice in a tweet.


The GOP's text specifically names Tlaib and Omar, as well as white supremacists including Richard Spencer and Robert Bowers, who killed 11 people at the Tree of Life synagogue shooting last October in Pittsburgh.

Zeldin is urging House Democratic leaders to bring his measure to the floor for a vote this week instead - citing "the latest anti-Semitic trope of Representative Ilhan Omar."


"Rep. Omar's continued peddling of anti-Semitic trope underscores the urgency to take action," Zeldin, R-New York, wrote in a statement. "I commend my colleagues who have spoken out against her unrelenting, unabashed anti-Semitic attacks. Rep. Omar knows exactly what she is saying and doing and has been hurling these attacks for years. The hatred that regularly pours out of her heart is a cause of the underlying problem with anti-Semitism in the world and absolutely not the answer to it."