Hydrant gushing water for days turned off in Strawberry Mansion 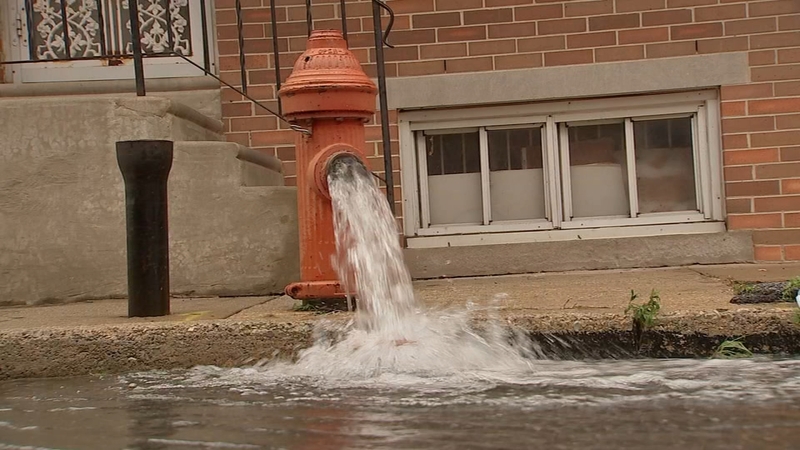 PHILADELPHIA (WPVI) -- A fire hydrant in the Strawberry Mansion section of Philadelphia that had been gushing since Tuesday was finally turned off on Thursday morning.

Water from the hydrant on the corner of North Hollywood and Oakdale streets poured into the roadway, despite neighbors saying they reported it to the city.

"A lot of water going to waste. A lot. Per minute," resident Natasha Wansley pointed out.

Katira Williams added, "My water- really really low, and it's never been like that."

Residents said the city had opened it on Tuesday to clean the storm drains.

Ozzie Reese said crews cleaned out a few of the drains, but when when one "got stuck, they stopped."

Wandley said she even saw someone bathing in the water, since water pressure was so low in some homes.

Residents said firefighters tried to shut off the water on Wednesday, but couldn't because the part was stripped.

Then around 9:15 a.m. Thursday, the Philadelphia Water Department trucks arrived.

Crews dismantled the hydrant and put the water to a stop after about ten minutes before making repairs.

PWD confirmed that they received a call about the hydrant leaking on Tuesday, but said it was not given the proper priority in their system. They said once they were made aware of the error, a crew was mobilized and turned off the hydrant.
Report a correction or typo
Related topics:
strawberry mansion (philadelphia)philadelphia water departmentwater damagewater
Copyright © 2021 WPVI-TV. All Rights Reserved.
TOP STORIES
Water main break in South Philly causes trouble for residents
Family of man killed outside of Pat's King of Steaks speaks out
Arrest made in 13-year-old murder in Frankford: Police
Firefighter killed in I-76 crash ID'd; other first responders injured
Comedian Jackie Mason dies at 93
New legislation would require women to sign up for potential draft
Should vaccinated people mask up with COVID-19 cases rising?
Show More
Black car buyer's experience marred by dealer's 'racist' Facebook post
LeVar Burton taking over as 'Jeopardy!' guest host Monday
Police ID man charged with murder after shooting at Pat's Steaks
Strangers gift $60K to beloved airport piano player after viral video
AccuWeather: Humid, PM T'Storm
More TOP STORIES News